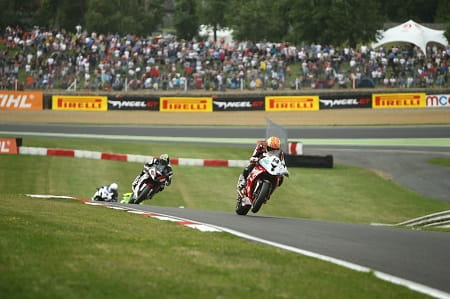 Lincolnshire teenager Lee Jackson made his debut in the British Superbike Championship last weekend at Brands Hatch, riding to a credible 16th place in the first race immediately after fighting for the lead in a 16 lap Superstock 1000 battle.

Alongside his usual duties aboard the Buildbase BMW in the Pirelli National Superstock 1000 championship, Jackson stepped up to replace injured team-mate James Westmoreland in the superbike class for the fifth round of the British Superbike Championship.

We caught up with the 18-year-old for a chat about how he got on switching between two different bikes across the weekend. Jackson impressed after following his team mate Ryuichi Kiyonari in the first qualifying session, jumping to 12th position but struggled to get the bike set-up for the second session meaning he started the race further back on the grid than he’d have liked.

“The bikes aren’t too different to be honest. Well, they feel the same to sit on!” said Jackson. “It was just a case of getting used to the brakes and the little bit of extra power plus one of the biggest things is that the Superbike has no traction control. Swapping back from the Superbike to the Superstock bike was easy but when it came to swapping the other way it was a bit more difficult. I enjoyed riding the Superbike as much as the Superstock bike in the end, it’s just a shame that we didn’t get the bike set up for qualifying 2 and then we could have been further up the grid!

“I tried to build up to every session, make sure everything was working and I didn’t crash once! If I’d crashed it’d have made it all so much hard work. When you don’t crash you’re doing more and more laps and getting more used to the bike.” 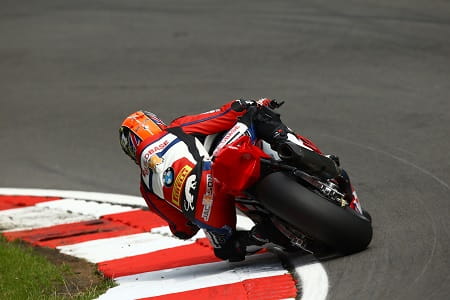 In the Superstock race, Jackson battled for the lead with Danny Buchan and Jason O’Halloran, leading into the last lap before getting duffed up to cross the line third. The teenager then ran straight from the podium ceremony back to his garage, where he immediately jumped on the S 1000 RR Superbike for the first race.

“In the first couple of laps of the Superbike race I was still thinking about my Superstock result and it frustrated me a little bit as I had my eye off the ball but then I started to chip away after the safety car. I was disappointed in myself really as I was only 0.1 off 15th so if I got going a bit sooner I could have been in the points.”

Jackson had said in the morning that he’d be able to give it his all in the second race after a couple of hours rest, but an incoming storm threw everything into the air. Having never ridden a Superbike without traction control in the wet before, Jackson was well and truly thrown in to the deep end. Despite reservations about riding in the wet, the youngster bit the bullet and says it was a great learning experience.

“Before the second race I put myself under a bit of pressure as I’d said if it rained I wouldn’t be bothered about going out as I’d had no track time on it in the wet. We got going and once I sort of got used to it I tried to chip away and build up as much momentum as I could but I was a bit nervous as I didn’t want to crash in the last race of the day and that made me a bit tense on the bike. Once we got to the last couple of laps I felt a bit more comfortable and at home with the bike.”

With the aim for 2015 to be on a Superbike full time, Jackson says the chance to get out on the bike at Brands Hatch this weekend was priceless in terms of experience before jumping on a superbike next season.

“The whole point in taking the ride was to build experience in a no-pressure situation. A lot of rookies experience a Superbike for the first time at the first round of their rookie season so it’s nice to have the experience should I get the chance to step up for 2015. It’d be good to have another go as it helps a lot.”

The youngster says he could be on the bike for the next round at Thruxton if Westmoreland isn’t fit in time.