14-year-old hotshot Joe Francis on 2012 and beyond 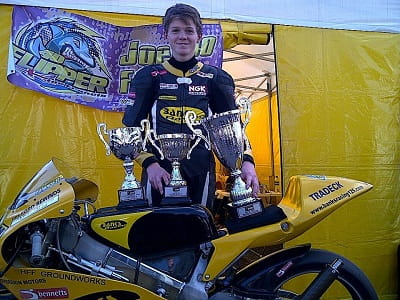 We caught up with Bennetts-backed racing prodigy, 14-year-old Joe Francis, after the final BSB round at Brands Hatch where he cemented 5th place in the MotoStar Championship (and 2nd place in the under-16’s Cup).

Francis confirmed he will be competing for a second season in the Championship in 2013 but upgrading from his current 2-stroke 125cc bike to a 4-stroke 250cc Moto3 bike.

The MotoStar Championship permitted the use of 4-stroke machines at the beginning of the current season and Joe believes the new breed of Moto3 style GP bikes are the machine of choice.

He said: “They definitely have an advantage, I can stay with them for a couple of laps but they can get on the gas earlier and harder, and pull a tenth on each corner.”

Francis is mentored by the 70’s and 80’s British racing legend, Roger Marshall, who he believes has been instrumental in his success during his rookie year in the British Championship.

Despite being cautious when asked what Marshall's secrets were, Joe did describe 2012 as an “awesome learning curve and I did better than I thought I would do with one highlight being 2nd place on the podium during the historic Cadwell Park race when Cat Green won.” With that win, Green became the first woman to win a British Superbike race.

Normally a placid, polite, eloquent and charming young man away from his race bike, Francis admits that when the helmet goes on, visor goes down and red lights go off, it’s war, After his race-long, elbows out five-way battle for 2nd place he said: “Everyone becomes your enemy.”

Bennetts is proud to support young talent in the shape of Joe Francis and his compatriot Kyle Ryde during the 2012 season.