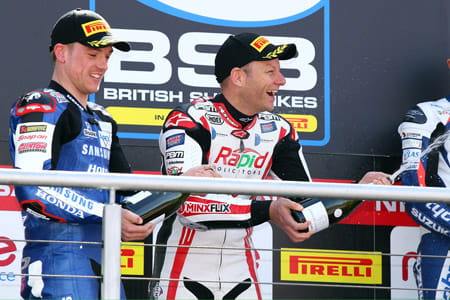 The first race of the 2013 British Superbike Championship kicked off at Brands Hatch this weekend, and after a long winter, the series’ contenders were all keen to get their hands on as many valuable championship points as possible.

True to his recent interview with Bike Social, Shane ‘Shakey’ Byrne was on top form at the Kent circuit, clinching pole position ahead of Sunday’s double header. The Kawasaki man used his position at the front of the grid to his advantage, dominating the field and holding off challenges from eventual third place finisher Josh Brookes to clinch the top step of the podium in race one.

Samsung Honda’s Alex Lowes was hot on Byrne’s heels though, finishing the 29-lap race just 1.376 seconds behind the winning rider. Lincoln-based Lowes is clearly keen to make an impression this year with his new team, and had previously demonstrated his potential winning ways at the recent pre-season tests at Donington and Snetterton.

Meanwhile, Ryuichi Kiyonari will surely be disappointed with his eighth place finish in the first race. The triple British champion returned to the series this year with Samsung Honda after a year racing in Japan, hoping to make 2013 the year he scoops his fourth BSB title.

In race two, it was Milwaukee Yamaha's James Ellison who secured the win as a mistake cost Byrne the top spot. From his pole position, Byrne took the holeshot, but Ellison had him firmly in his sights and the pair played a cat and mouse chase for the majority of the race. However, with just three laps remaining, Byrne was forced to run on at Surtees to avoid a collision, resulting in him dropping back to third place behind Lowes, who went on to claim second place.

Byrne now rides to the top of the championship standings with 41 points after one round, just one point ahead of second placed Lowes. Two consistent points-scoring finishes mean Brookes takes third, while Kiyo is currently sixth in the overall standings with 21 points.

However, there’s no rest for the BSB contingent as round two of the series takes place at Thruxton next weekend (12-14 April).

British Superbike Championship standings after one round