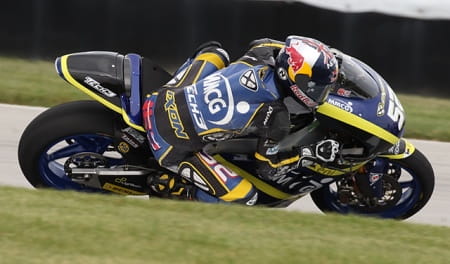 Tech 3 boss Herve Poncheral has stated that both of his Moto2 riders need to show more commitment in order to achieve better results for the team. Tech 3’s Moto2 team have recorded just four points finishes this season between both riders with a best result of twelfth at Brno from Danny Kent.

However, in practice last weekend at Silverstone there was a glimmer of hope for the Mistral 610 project as Danny Kent made two appearances in the top ten, taking sixth in the first session and eighth in the second. Although this was short lived, a crash in qualifying saw Kent qualify twenty-seventh and on race day he could only manage to climb up to eighteenth. Louis Rossi finished twenty-fourth after qualifying twenty-first. Kent currently sits in twenty-first place in the championship while Rossi sits twenty-third.

Poncheral said: “I am very disappointed with the result at Silverstone. Danny showed an incredible pace in practice and the bike was working well and we were very confident. The Mistral 610 was really competitive and we ended the weekend with the second fastest top speed, so the crash in qualifying was costly.

Even though he was so far down the grid I was still hoping he could show the true potential of the whole package and that he could fight his way through into the points. But that didn’t happen unfortunately and when I see the magnificent win from Scott (Redding) and see we were with him and sometimes in front in practice, I have a lot of regret and I am not happy.

Louis didn't start the weekend well when he got hit by another rider and he has a big pain in his left ankle and that certainly didn’t help. He had a great start but in the end he slowed down and on the last lap he got passed by four guys. But he tried his best and I thank him for that, but honestly speaking they need to show more commitment. The team is supporting them 100% and we have a good bike. Now I want them to demonstrate how good it is because the result in the race was frankly not good enough.”