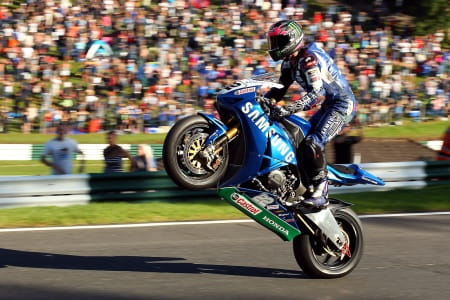 The sun was shining on Cadwell Park this weekend for the eighth round of the British Superbike championship. Lincolnshire’s Alex Lowes made the most of his enormous home crowd by taking pole position and both race wins, showing his intent for the championship.

For the second round in succession we saw championship leader, Shane Byrne beaten outright. The three-time champion took second in the first race and just fourth in the second after suffering tyre issues.

Tommy Bridewell continued where he left off following his Halsall Racing debut at Oulton Park. The bold West Country man took fourth in the first race but upped his pace in the second, initially challenging Lowes for the win and then settling into third place. Brookes’ fall saw the likable lad take second place behind the Samsung Honda, a career best result.

Bridewell’s pace is the hot story of Cadwell Park, with him now sitting eighth in the championship just twenty-five points outside that all-important top six. A strong performance at Donington Park could see Bridewell with a second attempt at BSB’s title showdown, after he slipped in to the three-round scrap last year on the Supersonic BMW.

With both Buildbase BMW’s struggling this weekend, Bridewell’s chances are looking good but he’ll need a pair of strong results at the next round.