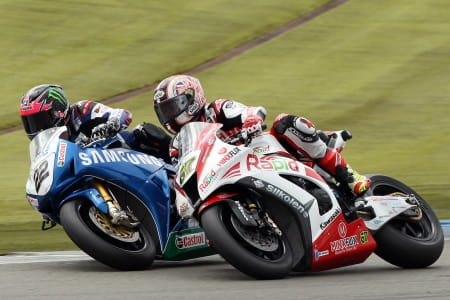 British Superbikes saw an explosive start to the showdown this weekend in two races that would see four of the six Title Fighters fail to score once. It was almost impossible to see beyond Alex Lowes after the first two days of the Assen round; the twenty-three year old topped every practice session and went on to qualify with a record breaking pole position that would have put him sixth on the World Superbike grid.

It didn’t quite go to plan for Lowes’ initially in the first race, as Milwaukee Yamaha’s James Ellison took the lead on the opening few laps to control the race. Unfortunately, the Cumbrian would later go on to suffer mechanical issues and retire from the race lead leaving Lowes and Byrne to scrap it out. An epic battle ensued between the pair which saw the Samsung Honda take the win despite Byrne attempting to pass on the drag to the line. A jubilant Tommy Bridewell took third in his first race with the Milwaukee Yamaha outfit. Brookes took fourth with series returnee, Nori Haga behind him in fifth.

In Race 2, the game changed and fans were treated to the most dramatic BSB race so far this year in which three title fighters would fail to score a single point. Attempting to get to the front of the pack early on, Lowes ran into the back of Shane Byrne’s ZX10R sending the three-time champion flying into the gravel at high speed.  Lowes went on to cross the line in front of Ellison and Tyco Suzuki’s PJ Jacobsen, although the Samsung Honda man was later disqualified from the result. This would mean that Milwaukee Yamaha and James Ellison would take the winning points with Jacobsen in second and Kiyonari third.

Josh Brookes failed to capitalise on two of his main rivals missing out on points as he fell while battling for fourth place with his team mate. Tommy Bridewell also crashed out of the race, taking PBM’s Nori Haga with him. Jon Kirkham finished fourth from the sixth Title Fighter James Westmoreland.

Lowes’ first race win sees him reduce the gap to Byrne in the championship down to just a point with Ellison now in third, twenty points behind. The series resumes at Silverstone in two weeks.