Joe Francis: "It's the best feeling ever" 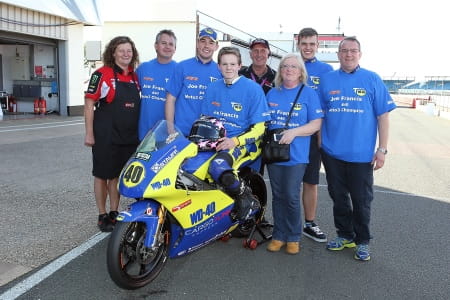 Bike-Social backed Joe Francis took fifth place in the Moto3 class this weekend at the iconic Silverstone circuit. It was one of his worst results of the year but it meant a great deal. With title-rival Tarran Mackenzie finishing just a few points ahead, Joe had done enough to ensure he had enough points for it to be impossible for him to be overtaken in the championship chase the final round at Brands Hatch.

We caught up with the freshly crowned champion for a quick chat:

“It was a tough weekend prior to the race. It was damp on Friday so we took it steady and ended up P7. In the first qualifying session we were running in pole position however I ran off the track meaning my tyres got wet. As I tipped into Luffield I lost the front as the tyre was wet so we ended up third. In qualifying two, we had fixed the bike but I started to suffer from brake issues and didn’t want to risk it so we didn’t get any laps in and ended up sixth.”

“In the race we got a good start and were running with the front bunch. The wind was a lot stronger than the first two days and I ran off track again losing touch of the front group. I decided not to push too hard as I didn’t want to fall off and I knew Tarran couldn’t catch the lead either”.

“Becoming champion is the best feeling ever, but we haven’t had chance to celebrate yet – we’ll do that at Brands when we get the trophy. We can also enjoy riding at Brands – we’ve not actually had a pole position this year so my aim is to take the pole but a race win and fastest lap would be nice too!”

“For next year, everything is happening in the background and we’re just waiting to find out. I don’t know where I’ll be yet but I’m definitely ready to move to the next level.”