Hutchinson storms to victory at Macau 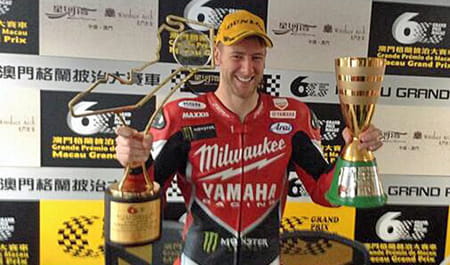 Ian Hutchinson stormed to a superb race victory at the 47th Macau GP today – his first appearance with the Milwaukee Yamaha team since the announcement was made earlier this week.

Despite having not raced for over a year, Hutchinson was keen to improve on the third place finish he achieved at Macau in 2011. This looked set to become a reality when he clinched pole position during yesterday’s qualifying by just 0.057s from SMT Racing’s Michael Rutter, who has won the Macau GP a staggering eight times.

In the opening laps, Hutchinson and Rutter pushed for the lead, but the Milwaukee Yamaha rider managed to edge out a two-second advantage before the race was stopped with two laps remaining due to a crash by RC Express Kawasaki’s Dean Harrison.