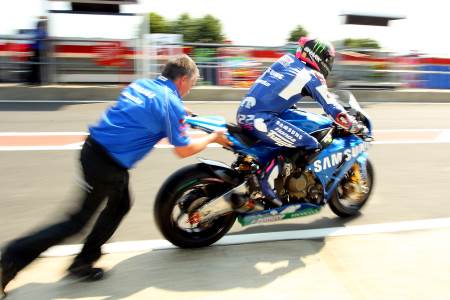 Bike Social sources suggest Honda UK’s future in the British Superbike series could be in doubt after the withdrawal of title sponsor Samsung.

BSB Team Manager, Havier Beltran has been present at Motorcycle Live over the past week wearing a plain Honda Racing shirt, as opposed to the Samsung-labelled attire we’re used to. Could this mean rumours the electronics giant have opted not to renew title sponsorship after two years with the team happen to be true?

Alex Lowes took the 2013 title with the squad and despite suggestions he’d stay on for 2014 the Lincolnshire youngster seems to be heading to World Superbikes with Crescent Suzuki.

Rumour has it the Louth based outfit have made attempts to sign three-time champion Shane Byrne and will make a decision on their BSB future in mid-December. Could the 2013 champions be absent from the 2014 grid?