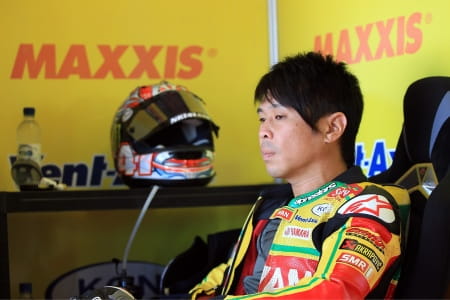 It has been announced that Noriyuki Haga will partner Shane Byrne at Rapid Solicitors Kawasaki for the Assen round of the British Superbike Championship. The three-time World Superbike runner up rode for Shaun Muir’s Swan Yamaha outfit in the British series last year with little success, failing to make the title fighters’ showdown and finishing the series in eighth.

Haga has ridden two events in 2013 with very mixed results. He returned to racing back in June with a wildcard appearance with the Grillini BMW squad in World Superbikes. It was disastrous; the Japanese rider took just two points for the team and even failed to beat teammate Vittorio Iannuzzo. Needless to say, Haga didn’t return.

When BSB visited Assen for the first time in 2012, Haga was one of few riders to have experience of the Dutch circuit from his World Superbike days. It also happened to be one of his best weekends in BSB, as he took fifth and sixth.  Bird is hoping Haga’s experience will enable him to assist new teammate, Shane Byrne in his BSB title challenge by providing interference for the opposition.

Haga will be replacing Keith Farmer after a season full of injury. The Northern Irishman recently revealed he’s undergoing medical investigation for a mysterious illness which has been affecting his energy levels. It is expected Farmer will sit out for the rest of the season.

Haga spent many years at the front of the World Superbike Championship and is without doubt one of the best riders never to win that championship. We took a look at his career ahead of his return to WSBK back in June, you can read it here.