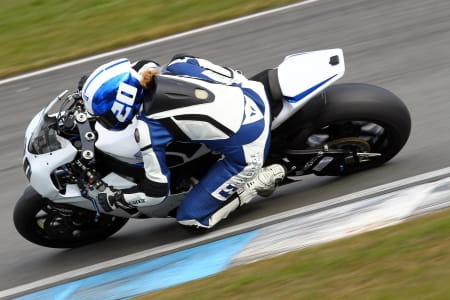 The ladies are out in force this weekend at Brands Hatch, with a record five females competing in the BSB Championship and supporting classes at the Kent-based circuit.

Jenny Tinmouth is representing the ladies in the BSB class, the fastest woman round the IOM TT is hoping to get some solid finishes this year and improve on her results from the 2012 season.  We spoke to her during testing so be sure to see what she had to say in our interview.

In the Superstock 600 class, fiery red and Northern Irish girl, Nicole McAleer will be riding the Gearlink Kawasaki bike. And viewers of the Motostar British 125 Championship race will have Catherine ‘Cat’ Green who finished 3rd in last years championship, Samantha Burman and Steph Waddelow to watch.

It’s great to see a number of females rising through the ranks of motorcycle racing and we will be keeping an eye on these feisty females to see how they get on during the racing season.