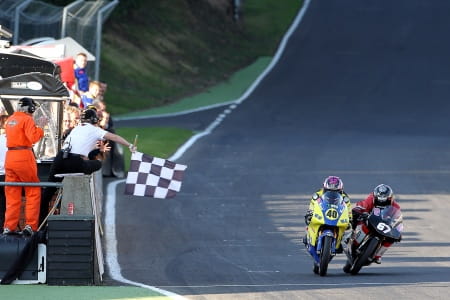 Joe Francis took his third win of the season in the Monster Energy British Motostar race at Cadwell Park this weekend. Francis crossed the line just several hundredths ahead of 125cc rider Andy Reid after a sensational battle saw the pair swapping positions lap after lap. Joe’s main championship rival, Tarran MacKenzie fell from his KTM at the mid-way point battling for third position after a poor start. Francis now leads the Moto3 championship by thirty-three points from MacKenzie.

You had a great race this weekend Joe, talk us through it!

It was a great race from the start. Tarran made a bit of a mistake early on so I took advantage of that. Andy had a bit of a gap and I managed to catch him up and then saw the gap behind getting bigger and bigger. I kept looking behind, just to double check and when I saw we were coming into the last couple of laps I made sure I was close to Andy so I could pull a move. He was so quick on the mountain that he got me every lap and I couldn’t defend, it looked like I had made a silly mistake but I just couldn’t defend it so I was happier to stay on his back wheel into Hall bends and then I got him into Barn. He came back on me round the outside at Barn and tried to knee me out of the way but I just managed to get it!

How did you find racing against the 125?
It was a pretty equal race, both bikes were really good and both seemed to have their weak and strong points but it was a great race between both of us.

Your main championship rival, Tarran MacKenzie fell off in the race, fortunately he’s OK but this means your championship lead is looking pretty strong?

I only found out Tarran had fallen when I came in, he had a big highside and I hope he’s OK but yeah, it’s good for the championship.

The next round is Donington Park, is it a circuit you like?

We went well there last year until we had a little crash so hopefully we can be strong again and try to clinch another win. If not, we’ll just settle down as now we’ve got a nice big points gap it should be looking alright until the end of the year.