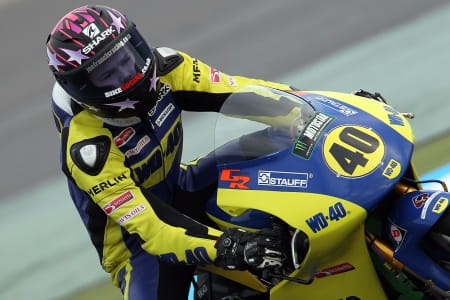 Bike Social’s Joe Francis endured a little bit of a tough weekend at Assen this weekend in the Motostar championship. Mechanical issues would mean Joe could only get three laps in during qualifying and therefore qualify tenth. In the race, Joe fought back and finished second in the British Moto3 class to Joe Irving and (most importantly) ahead of championship rival, Tarran MacKenzie. We caught up with Joe to see how he got on.

“The weekend started well, in first practice we were third and in second practice we were sixth. However in qualifying on Friday afternoon I did one lap and had to come straight in because of a brake problem. We got back out and managed to do three laps and then the bike broke down meaning they were the only laps we’d get in.”

“In the second session on Saturday the bike broke down on the first lap, we think it was something to do with the fuel filter or wiring loom. That meant we didn’t get any laps in other than the three on Friday so we qualified tenth.”

“We got the bike fixed for Sunday and despite it not being set up right we were doing well although we started to drop back as the bike started to lose power. I was a bit worried that Tarran behind would catch up but I managed to maintain the gap and extend my championship lead.”

Joe now has a thirty-six point lead in the Motostar and is in good stead to win the championship next time out at Silverstone.

“The plan at Silverstone is to try and stay on and aim for the podium. If Tarran wins, I need to finish third and then it’ll all be wrapped up. We just need to stay on, aim for the podium and put a little bit of pressure on Tarran as he has to win the race to keep the championship open.“

“I don’t mind Silverstone, it’s not my favourite circuit but we got an OK result there last year. We’ve tested there and had done some pretty good times so we should be strong but I don’t want to push too hard, I want to win the championship. “

On his plans for 2014, Francis commented: “I’m not too sure about next year yet. Ideally I’d like to go to the Spanish championships or MotoGP. I just need to get a good ride and continue to learn.”