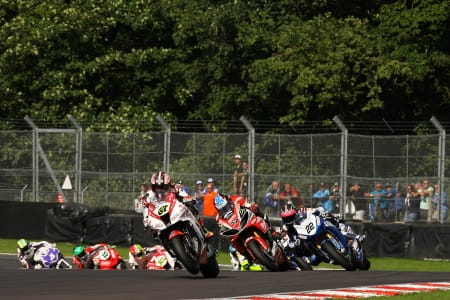 Having already confirmed his place in the title fighters’ showdown, Byrne can relax for the next two rounds. In fact, he could score no points at all and still lead the championship as the series rolls into Assen at the end of September. The task for those chasing him is to bag as many podium credits as they can from the remaining four races in order to prevent Byrne’s lead being too extensive.

Byrne hasn’t actually won at Cadwell since his first championship winning year in 2003 and last year the circuit was the scene of the crash that caused Byrne’s shoulder injury, putting him out for two rounds. Last time out at Oulton Park we saw Byrne beaten in two races without having made any mistakes, that’s the first time that’s happened this season. That coupled with Byrne’s winless decade at the Lincolnshire circuit puts his competitors in prime position to gain ground on the Kent man this weekend.

Favourite has to be Lincolnshire lad, Alex Lowes. Currently third in the championship after a difficult weekend at Oulton Park, Lowes took his first ever BSB podium at Cadwell Park last year on the WFR Honda. Now riding for Honda UK, who are based in Louth, making Cadwell their home track as well as Alex’s. However, last weekend at Oulton Park we saw Lowes make two of the first mistakes he’s made all season, first pushing James Ellison off the circuit and then falling from a podium position at the last corner of the last lap. That being said, it’s just as likely the youngster will come back with a vengeance looking to make up for the disappointing weekend.

Shaun Muir’s Yamaha squad have won the last five races at Cadwell Park with former champion Tommy Hill and Michael Laverty. While they may be adorned in new colours with Milwaukee, the expertise of the team is still there and their new rider is no slouch either. Currently fourth in the championship, James Ellison took his second win of the season last time out at Oulton and will be looking to maintain Muir’s record at the circuit and gain ground in the championship fight.

King of the mountain, Josh Brookes (that’s Cadwell’s mountain by the way, he might have been good at the TT but he isn’t John McGuinness just yet) will be looking to continue where he left off at Oulton Park. Brookes took two podiums at the Cheshire circuit including a stunning victory in race 2, his strongest of the year. Brookes has been on the podium at least once in every visit he’s made to Cadwell Park and took one victory in 2010. On current form, he could well be set to repeat that this weekend.

With Byrne confirmed in the showdown, Brookes, Lowes and Ellison are all in the position to seal their places this weekend. However, the fight for the last two title fighter spots is still fully up for grabs. The fight is between Samsung Honda’s Ryuicihi Kiyonari and Buildbase BMW’s pairing of Jon Kirkham and James Westmoreland. Currently held by Kiyonari and Kirkham, Westmoreland will be looking to make ground at his home track. With Kiyonari also having a strong record at the Lincolnshire circuit the battle could be quite exciting.

Tommy Bridewell’s also one to look out for, after an incredible first outing with the Halsall Kawasaki squad taking two fifths and a fourth. However, being a massive 44 points behind Kirkham in the last showdown spot, it’s a big ask for the West Country man to get into the showdown.

Don’t forget, it’s Bank Holiday this weekend so the weekend’s activity will kick off on Saturday and the races will be on Monday.