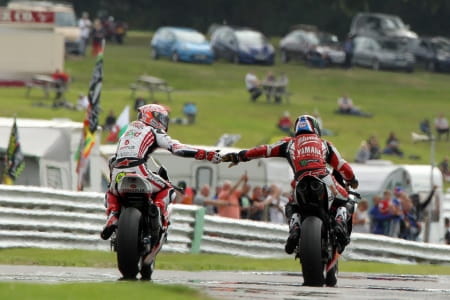 Oulton Park saw a triple header of British Superbike races this weekend and a different rider taking victory in each one shows the sheer level of competition in the domestic series. Championship leader, Shane Byrne went into the weekend looking for his fiftieth BSB win. Already the most successful BSB rider ever, Byrne had taken eight victories from twelve races ahead of Oulton Park, however there were a couple of riders determined to stop his reign.

In the first race, Milwaukee Yamaha’s James Ellison managed to keep the thirty-six year old at bay to take his second victory of the season. It had looked as though Byrne would make a last-lap pass on the Cumbrian; however it wasn’t meant to be. Alex Lowes crossed the line third, taking his eleventh podium of the season. Josh Brookes took fourth from Tommy Bridewell, who had an incredible debut weekend with the Halsall Kawasaki team.

In the second race, Shakey took the lead from the start although Brookes, Ellison and Lowes were never far behind. A harsh move by Lowes into Island bend would see Ellison forced off track leaving just the Lincolnshire man and the Australian to try and prevent Byrne from taking his ninth win of the season. Brookes looked close on the last lap, although a tough pass by Alex Lowes saw the Australian fall back a little, while he managed to regain second place he wasn’t quite close enough to take it from Byrne. Lowes, still pushing hard, fell from his Samsung Honda out of third place at the last corner. Lowes’ team mate, Ryuichi Kiyonari was left to pick up third place, while Tommy Bridewell continued to show his potential, crossing the line in fourth.

Keen to make up for missing out on the victory in the first race, Brookes hassled Byrne in the final race of the weekend until he finally got past. Penalised four places on the grid for his move on James Ellison in the second race, Alex Lowes looked keen to make up lost ground as he began to look for a way past Byrne on the last lap. His attempts were unsuccessful, however, as Brookes crossed the line followed by Byrne, leaving Lowes third. James Ellison took fourth place from Tommy Bridewell while James Westmoreland took sixth.

Byrne’s weekend performance was enough to guarantee him a place in the BSB title fighter’s showdown, which begins in Assen on 20th September. In fact, as the points are reset at the start of the showdown with just podium credits added on, Byrne could miss both Cadwell and Donington and still be on top of the title chase come Assen. Brookes moves into second in the points, while joint on podium credits with Alex Lowes. BSB are next out at Cadwell Park in just under two weeks.