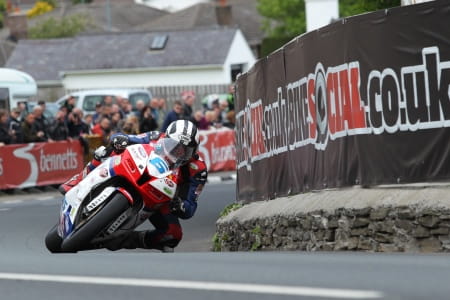 This year’s Ulster Grand Prix is set to kick off next week and with a whole host of huge names from road racing set to take part, the event looks to be a scorcher. Here, we’re taking a look at some of the top riders preparing to take to the Dundrod circuit next week.

After a stunning campaign at the Isle of Man TT, taking four victories, Michael Dunlop is without doubt one of the favourites riding for the Honda TT Legends in Superbike and a PTR-tuned Honda CBR600 in the Supersport. Dunlop has shown he is more than capable of winning on both the big and small bikes and on current form, it’s quite possible we could see a repeat of his 2011 hat-trick, if not more.

Despite failing to get on the podium at this year’s TT, last year’s first Superbike race winner, Guy Martin could well be one to take the honours on his Tyco Suzuki. The Lincolnshire man took a win in July’s Southern 100 and will be keen to add to his tally of eight Ulster Grand Prix victories.

Taking victory in last year’s first Supersport race, the elder of the Dunlop Brothers, William is a strong candidate to take Shaun Muir’s Milwaukee Yamaha R6 to victory in the 600 class. The Northern Irishman is also starting to look strong on a Superbike; he put in a 130mph+ lap at the TT this year.

Fastest newcomer twelve months ago, Dean Harrison will enter his second Ulster GP on a high after an incredible run out at the Isle of Man TT. The twenty-four year old took second in the lightweight TT and a stunning fourth in the Superstock. It’s been a great season for, Harrison, who took victory in the Supersport race at the Southern 100.

After a brace of podiums in 2012, Connor Cummins will be looking to move up the podium this year on his Milwaukee Yamaha, while Aussie Cam Donald will return to Dundrod on the Wilson Craig Honda after missing last year’s event.

Jamie Hamilton looks like he could be a potential winner in the Supertwins category, the former British STK600 champion competing on the KMR Kawasaki.

Practice and qualifying for the races will be held throughout next week, with the main Ulster Grand Prix races set to take place on Saturday 17th August.