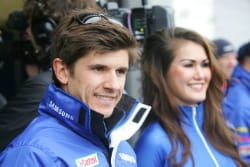 Last minute shenanigans at Honda last night saw Ian Lowry stood-down from the Padgetts Honda team in the final round of the BSB championship, with Aussie Jason O’ Halloran given his ride for Brands Hatch.

No official comment on why Lowry was dropped at the last minute was given, but rumours suggest Honda Racing boss Neil Tuxworth is believed to have lost confidence in Lowry.

Aussie O'Halloran, claimed 2nd in the British Superstock 1000 Championship for Samsung Honda earlier in the BSB season, and we’d say if he proves himself this weekend on the Superbike then surely he’s odds-on for a full-time BSB ride in 2013.

Honda's statement said: ““In recognition of the hard work put in by the 24-year old Australian over the last two season with the official Honda squad, and as a thank you for securing 2nd in the 2012 British Superstock 1000 Championship for the Samsung Honda team – O’Halloran has been given the opportunity ride for Padgetts Racing in the premier British Championship class, aboard the Superbike specification Fireblade."

O’Halloran said: “This represents a great opportunity for me to show what I can do in the Superbike class, against some of the best Superbike riders in the world. It is going to be a big challenge because I have had no testing time on the bike but I am going to embrace it and push my hardest for a strong result. I would like to thank Samsung Honda and Padgetts Racing for giving me this opportunity.”

The Aussie hotshot was 19th after today's free practice 1, some 3.8 seconds down on session leader, Kawasaki's Shane Byrne.