All or nothing for Lowes & Byrne at Showdown Finale 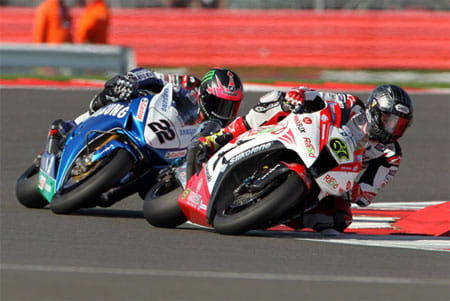 With just one point separating BSB title contenders Shane Byrne and Alex Lowes ahead of this weekends championship decider at Brands Hatch, it’s set to be explosive. British Superbike’s Showdown System has come up trumps this year providing some of the closest racing ever seen in BSB over the last two rounds at Assen and Silverstone.

After an epic opening race at Assen between Lowes and Byrne, things got a little too close in the second as Lowes clipped Byrne causing him to fall from his Kawasaki. Two weeks later at Silverstone saw yet another titanic battle between the pair, with no other championship contender getting so much as a look in. Lowes took the first race and Byrne the second by just 0.012.

In normal circumstances, it’d be easy to say that should Byrne be leading the title chase heading into a final round at Brands Hatch, he’d win the title. The Kent man has an astonishing record at Brands, in the last three years he’s won eleven out of the eighteen races held at Brands Hatch. If you were to base a prediction on stats alone, Byrne would have to be the favourite.

However, with Alex Lowes in the mix it really isn’t as simple as the stats suggest. Lowes is on fire at the moment, he’s crossed the line in first in seven of the last eight races. That would have been seven victories had he not been disqualified at Assen and the only other race he hasn’t won he came second by that 0.012 second. Lowes is young and hungry and has already shown he’s willing to fight tooth and nail for the title.

With James Ellison, the closest rival to Byrne and Lowes, forty points back, it’d take quite a bit of drama to see anyone but the Rapid Solicitors Kawasaki or Samsung Honda take the title. Ellison says he hasn’t given up yet, although acknowledges it’s a big ask and would need both Byrne and Lowes to no-score in at least one race.

Josh Brookes on the other hand has written off his title chances, almost sixty points behind Byrne it would be nigh on impossible for the Aussie to take the title. It’s not the title Brookes needs to focus on either, with Buildbase BMW’s James Westmoreland just twelve points behind the Tyco Suzuki rider the focus must be upon retaining that fourth place and getting ahead of Ellison for third if possible.

Whatever happens at Brands Hatch this weekend, 2013 will be a year to remember in British Superbikes and cliche as it sounds, there’s more to come yet…