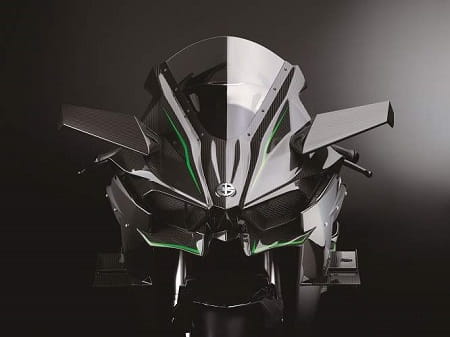 Kawasaki unveiled the revolutionary Ninja H2R this morning in Cologne, a 296bhp, 998cc supercharged hyperbike for the ‘closed roads’. The Japanese marque was sketchy in giving away too much detail about the bike with a slightly tamer sibling expected to be uncovered in Milan next month.

According to Bike Social sources, just ten Ninja H2Rs will make their way to the UK at an RRP of £50,000, well in excess of the rumoured £30k.

We are told the street legal edition, the Ninja H2, will produce a modest 250bhp and cost in the region of £25,000 with just fifteen coming to the UK.

Both models will be available from March 2015 but with just 25 units in total coming to British shores, you’ll need to get in the queue early!