This time last week, the motorcycling world was preparing for Kawasaki's much-hyped Ninja H2R to show its colours at the INTERMOT show in Cologne after a month-long teaser campaign. And true enough, the bike didn't disappoint with its angular, carbon-fibre fairings, green trellis frame and supercharger.

Kawasaki has continued with its teasers as they build up to the release of the Ninja H2 at the EICMA show in Milan on 4th November. That said, there are rumours the bike could even star at the USA-based AIMExpo on 16-17 October.

Either way, social media has been buzzing over the past 24 hours with images showing the R v. street version in what appears to be an early release of the next video: 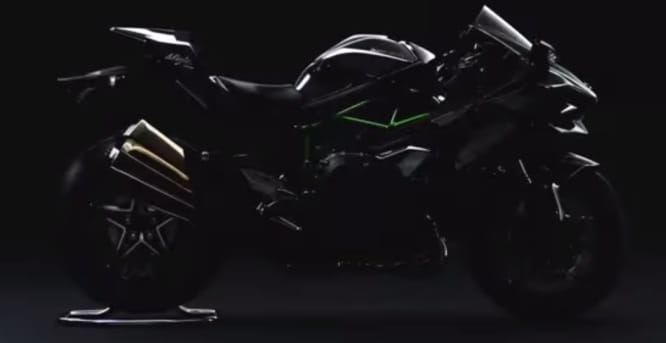 Meanwhile, back on the official Kawasaki YouTube channel, here is the a video released today of the Ninja H2 testing at Kawasaki's own track, Autopolis, in Japan:

We got our hands on the prices and availability of the 296bhp R and the 250bhp road-going version, also supercharged and simply known as the Ninja H2 which will weigh in at £50,000 and £25,000 respectively. Both will be available in the UK in March 2015 but there will only be 10 of the R and 15 of the regular bike, so get your deposits down sharpish.