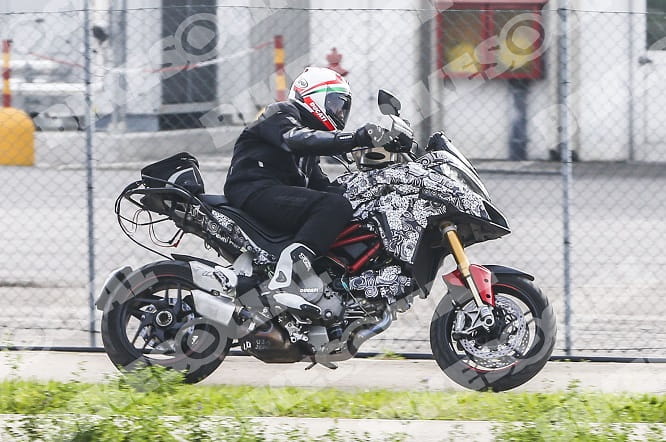 Ducati’s popular adventure sports-tourer, the Multistrada 1200, gets some impressive upgrades for 2015, as we can see from the above spy shot, including a brand new engine to produce a 10bhp increase up to 160.

The Italian firm will be officially unveiling the new bike at the EICMA Milan motorcycle show at the beginning of November and, as we predicted last week when Ducati unveiled their brand new 1,198cc Testastretta DVT engine, it will be the one used in the 2015 version of the Multistrada 1200.

DVT stands for ‘Desmodronic Variable Timing’ and the Bologna-based manufacturer claims this is the first motorcycle engine with variable timing of both the intake and exhaust camshafts. Ducati have confirmed the new engine will produce 160bhp (117.7 kW) at 9,500rpm with maximum torque of 136 Nm (97.36 lb-ft) at 7,500rpm. 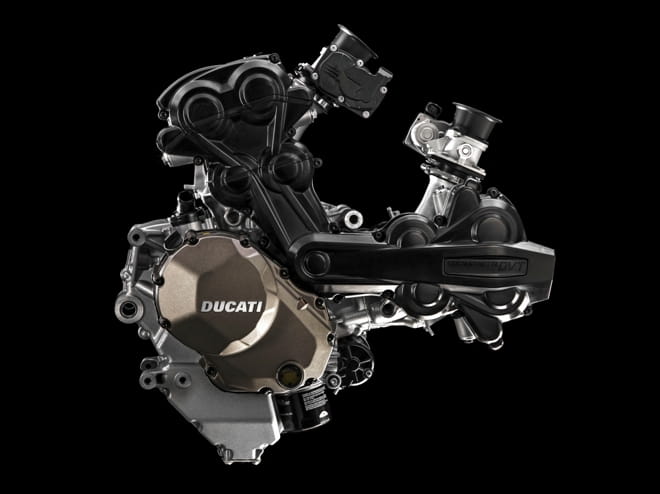 We can also see from the spy shot other significant upgrades include aesthetic amends around the front and lower fairing which offer better wind protection and aerodynamics. The tubular steel trellis frame and sub-frame have been redesigned. Out goes the ant-eater styling from the nose and in come smoother lines, a seemingly larger radiator, a new seat unit, wider headlights, a lower fuel tank and upgraded forks and Brembo brakes.

The word ‘USA’ can be seen in white writing on the bike’s silencer which could refer to the US-spec parts because our friends on the other side of the Atlantic have different emission laws.

Competition hots up for 2015 with BMW's forthcoming introduction of their S1000XR, Kawasaki's upgraded Versys 1000 as well as KTM's all-new 1290 Super Adventure and the Aprilia Caponord 1200 Rally, both revealed last month.

The current Multistrada 1200 was introduced in 2010 with the 1200 S making an appearance in 2012 and the latest line-up included five models; the basic spec 1200, 1200S Touring (and D-Air version), 1200S Granturismo and 1200 S Pikes Peak. Each has four riding modes (Sport, Touring, Urban and Enduro), Ride-by-Wire, Traction Control and ABS.  The S models also come equipped with active suspension known as ‘Skyhook Suspension’ in Ducati circles. Expect all these toys and more to be available on the all-new 2015 version unveiled at EICMA. 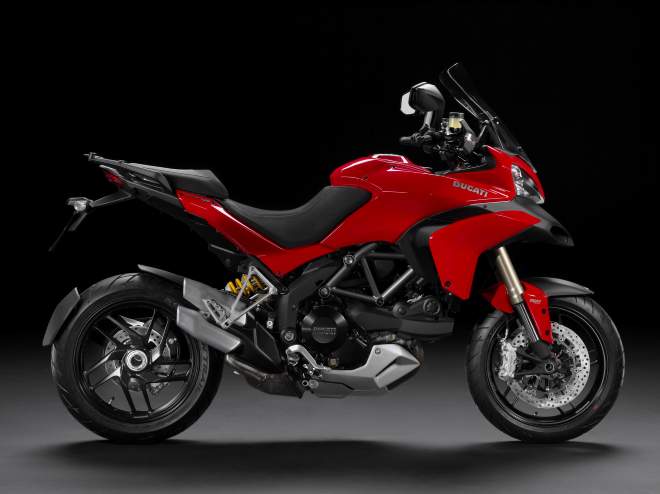 We will reporting live from the Milan motorcycle show so make sure you’re tuned into Bike Social from 3rd – 5th November for the press launches and full details of the new Multistrada. Ducati are also expected to announce a 1299 Panigale.

Any initial thoughts ladies and gents?  or !