Bonhams are renowned for featuring exclusive and exotic classic bikes at their numerous annual sales and the auctioneer has come up trumps for this year’s Bond Street Sale, set to take place on Sunday 30th November 2014.

Taking centre stage in the two-wheel category at this year’s event will be a 1929 Brough Superior SS100 Alpine Grand Sports plus the iconic 1950s Vincent Series C Black Shadow.

The 986cc SS100 was one of the most charismatic bikes in Brough Superior’s stable. In 1925, founder of the legendary British marque, George Brough took on the gruelling reliability run of the Alpine Trial on board an SS100, enduring vast mountain peaks, chilling temperatures and the twists and turns of Austria, Croatia, Slovenia and the infamous Stelvio Pass. This remarkable achievement was the inspiration for the touring-spec SS100 Alpine Grand Sports edition estimated to sell for a whopping £270,000-320,000.

Brough Superior, known as the Rolls Royce of motorcycling, will launch a modern day version of the SS100 at this year’s Milan Motorcycle show next week. 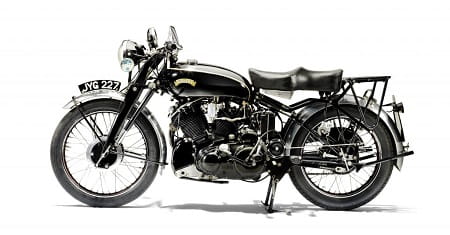 Also featuring at the Bond Street Sale will be this 1950s Vincent Series C Black Shadow. The 998cc Black Shadow was the fastest vehicle of its time with an impressive top speed of 125mph, making it an icon of 1950s automotive engineering. Today the Black Shadow stands out as one of the most desirable classic bikes and is expected to reach between £70,000-90,000 at auction.

Both machines will be on display at the Bonhams London to Brighton Run preview sale held at 101 New Bond Street this week (30th-31st October) and will also take part in the National Motorcycle Museum’s 30th Anniversary celebrations this November.

We’ll be in Milan next week for the EICMA exhibition, bringing you news of all new bikes including Brough’s SS100, follow live updates on Twitter and Facebook.