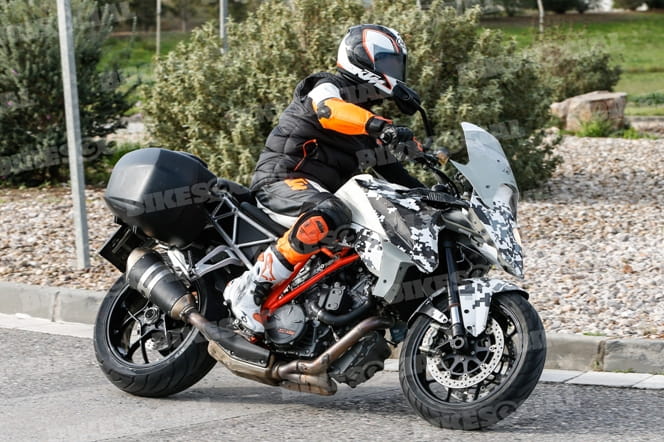 The dust hasn’t even settled after the 2015 new and updated motorcycles have been announced at the recent shows yet KTM are already going through testing near Barcelona in Spain ahead of a 2016 release of their 1290 Super Duke based Sports Tourer.

The new bike will replace the 990 SM-T and should therefore be known as the KTM 1290 SM-T.

From the spy shots here, we can see that despite the disguise the bike is a close match for the 1290 Super Duke R, which we only road tested recently, with the notable exceptions of an additional fly-screen for touring capabilities, a more defined two-piece seat arrangement, revised and longer sub-frame to cope with the additional weight of the panniers as well as higher bars for a more upright riding position. 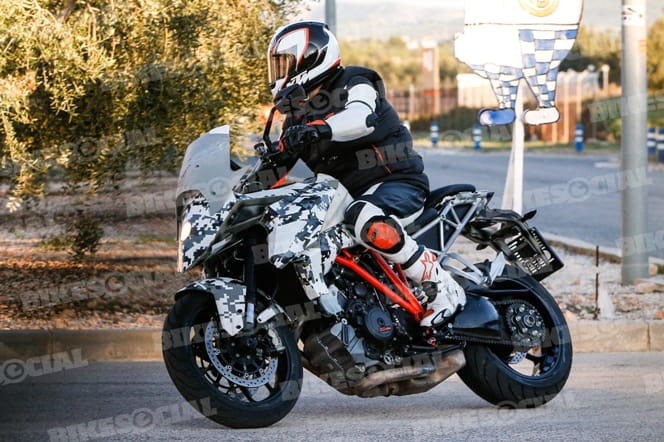 We understand that KTM will use the same engine that will appear in the recently unveiled 1290 Super Adventure, due to arrive in dealerships in 2015, which in turn uses many engine components from the 1301cc, V-Twin, 1290 Super Duke R to join new cylinder heads and anew crankshaft to produce a 160bhp sports-adventure machine.

Also spotted testing in Spain was a face-lift of the 390 Duke and we'll bring you spy shots when they arrive.

The larger-capactity, high-powered sports tourer market is growing, quickly, and seems to be more focused on performance. It's diversifying from the sports adventure style bikes and is out to capture a whole new audience. Does the KTM capture you?