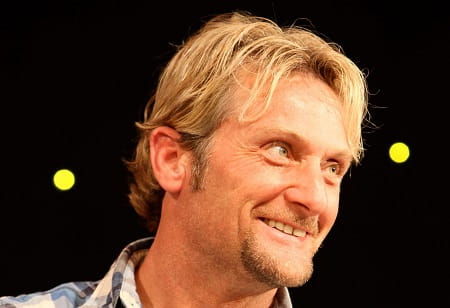 Ever wanted to see four time World Superbike Champion Carl Fogarty eat a kangaroo testicle? No, we haven’t either but according to recent reports he may soon be doing just that.

The Daily Mirror is reporting that Fogarty will participate in this year’s series of ITV’s “I’m a Celebrity, Get me out of here’, a show which takes a bunch of celebrities and places them in a camp in the middle of the Australian outback for two weeks. Competitors have to compete for rationed food and engage in gruesome tasks designed by producers to instigate tension within the camp.

Fogarty, who retired from racing in 2000, reportedly arrived in Brisbane this morning and is expected to be joined by celebrities such as rapper Tinchy Stryder, actress and all-round hottie Michelle Keegan and Olympic gold medallist Tom Daley.

The former World Champion, famed for his aggression both on and off the track, might not be the only name in the jungle with links to the two-wheeled world. Former BT Sport MotoGP presenter Melanie Sykes is also claimed to be appearing on the show. Sykes was announced as the main anchor of BT Sport’s MotoGP coverage at the start of this season but was ditched after just four rounds.

This won’t be Fogarty’s first venture into the entertainment industry, for the past two years he’s been touring the UK with a comedy chat show alongside close friend and former racer James Whitham.

The fourteenth series of “I’m a Celebrity, Get me out of here” starts next Sunday on ITV1 at 9pm.