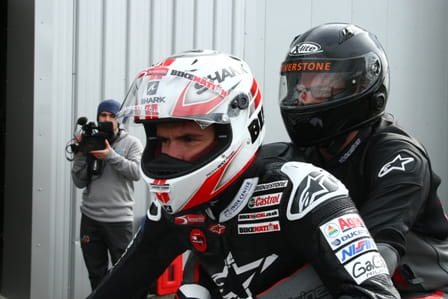 On Sunday he rode to a heroic seventh place at the Qatar Grand Prix, and on Wednesday MotoGP hero Scott Redding was taking pillions round Silverstone on a Honda FireBlade in the freezing cold.

The Go&Fun Honda rider flew home to Spain, then drove through the night in his VW van to get to the BT Sport TV show on Tuesday evening, and then on to the Bennetts Media Day where he came together with a host of motorcycling’s most famous faces. On arrival Redding said: “I’m so tired I don’t even know what day it is. Actually, what day is it?”

The event at Silverstone’s Stowe circuit was the official launch of Bennetts’ Grassroots campaign for young riders, and also saw the announcement of a new motorcycle online super store – BikeNation.co.uk 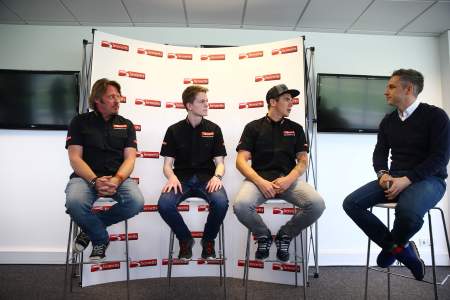 Stars in attendance included Bennetts ambassador’s Charley Boorman, Grassroots ambassador and former WSB Champ Neil Hodgson, host for the day television presenter Matt Roberts. All three got stuck into the day with Boorman taking to the track on the Bennetts R1 like a man possessed, and Hodgson cutting some cold laps on the Ducati 899 Panigale pursued by Bike Social’s Potter on a Honda FireBlade SP. 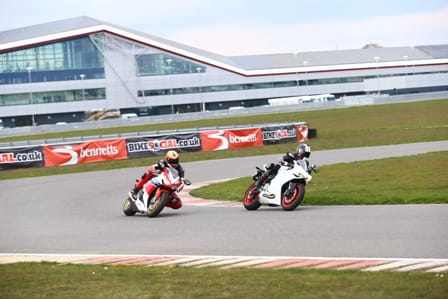 Matt Roberts introduced the two Bennetts Grassroots youngsters;  Josh Owens, 14, from Liverpool and Rory Skinner, 12, from Perth in Scotland.  The pair receive financial support for the season ahead as well as mentoring by Neil Hodgson.  For the full story click here. 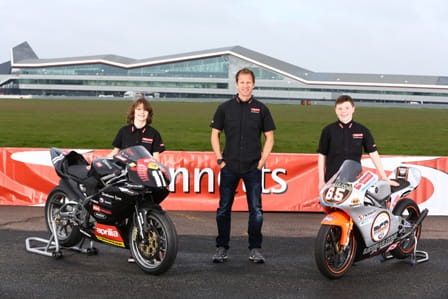 Hodgson said, “We’ve got so many young and talented racers in this country but racing’s not cheap so I think what Bennetts is doing is admirable and I’m glad to be able to help out.  I’ll give them as much guidance as I can.”

Redding’s chipped in with his advice, “Have fun.  When I was racing in 125’s I wasn’t taking it seriously enough but then I began to take it too seriously so you’ve got to find the right balance and if you start having fun, you can ride faster.”

Owens and Skinner showed off their talent on the Stowe circuit riding their RCD Motorsport Honda RS125 and Aprilia RS125 bikes. Owens will be competing in the British 125cc Championship which supports the BSB series whilst Skinner is racing in the Aprilia Superteens Championship, which he already leads having taken three wins and a second place in the first four races of the season.

Next on track was Redding who took members of the media including BBC World’s Azi Farni and Nick Harris from The Sun, on pillion rides, as well as Bennetts MD, Vince Chaney, on a standard Honda Fireblade. The MotoGP star packed his race lids away ready for the next round in Texas so he borrowed our Rich-Art designed Shark lid for the day. 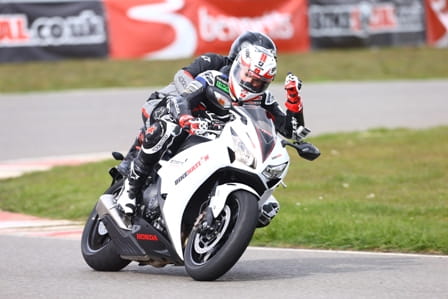 Making her pillion debut, former BBC MotoGP reporter, Farni, said, “That was fast, amazing and educational – I loved it”.

Redding said, “I’ve known Azi from the GP paddock for years so I took it easy on her as it was her first time!”

Redding also dropped the flag in the Mini Moto Final which included Charley Boorman jumping the start followed by testing the 3bhp machine’s grasstracking ability. Bennetts-backed British Moto3 Champion Joe Francis took the win having taken the lead into the first corner. The rain didn’t seem to affect his smooth style as he lead Skinner and Owens home as the three youngsters completed the podium.

Matt Roberts took a tumble but came away grinning. He said, “I wish I’d tried MiniMoto 30 years ago!” 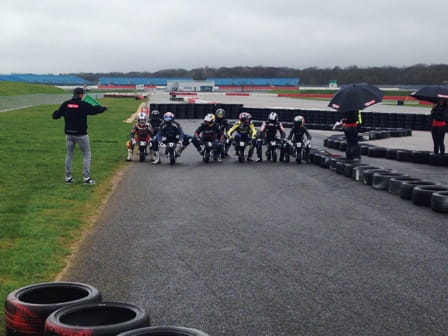 Joe Francis is expected to be making an announcement over his racing plans for the season ahead very soon whilst Boorman is currently recording a high profile TV series which is to be kept under wraps for now.

Take a look at the thousands of products on Bike Nation; www.bikenation.co.uk 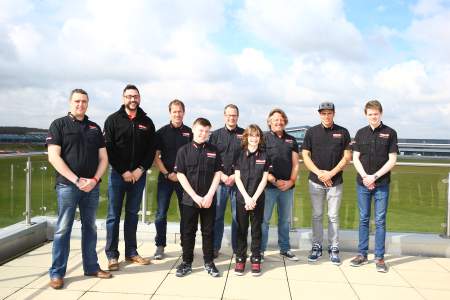