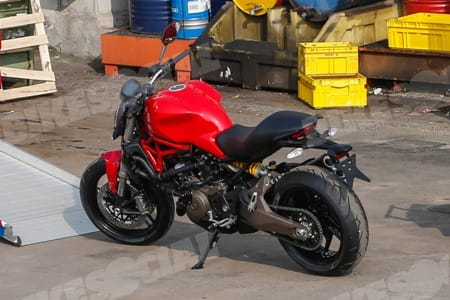 ***NEWS UPDATE:*** SENIOR Ducati staff have been spied riding the new Ducati Monster 821cc against its other European and Japanese rivals, including the Honda NC750, Yamaha MT-09 and MT-07.

Sources suggest the new Monster 821 will make a claimed 115bhp when it goes on sale.

ORIGINAL STORY FROM MARCH 25:
Ducati is preparing for another new version from its Monster platform – this time using a liquid cooled 821cc engine as these exclusive pictures show.

Our spy shots show the model is in a production-ready condition yet sources say that it’s at least a few months away from being launched. On that basis we believe this could potentially take place at the Ducati World Week at Misano in July.

The Bologna-based manufacturer will use the same 821cc engine found in the Hyperstrada and Hypermotard models which, like them, the Monster is expected to pump out a brisk 110bhp. Some Ducati purists may not be too happy about its liquid cooling, realistically this is how manufacturers can meet Euro emissions targets while making their bikes smoother and quicker.

Expect the Monster 821 to be priced closer to the Hypermotard (£9,695) than its 796 sibling (£7,995) but it will be equipped with the safety features found on the newer models such as engine modes, ABS and traction control.

The new 821 has many similarities between it and its 1200cc older brother with an identical frame, chassis, tank, seat and twin exhausts. However, we can see from the images that an all-new double-sided swing arm and tail tidy mark the significant differences. 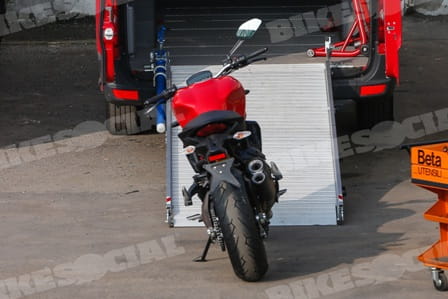 Ducati recently announced a record sales year for 2013, marginally up on 2012 which is encouraging and it was the Monster range that contributed significantly not only last year but continuously during its 21 year stretch.

This also means there could be a gap in the range for a Ducati Scrambler which you might just hear about it here at Bike Social!

The bike will enter what has recently become an ultra-competitive market with the likes of the Triumph Street Triple, Yamaha MT-09, Kawasaki Z800 and MV Agusta Rivale 800 already fighting it out.