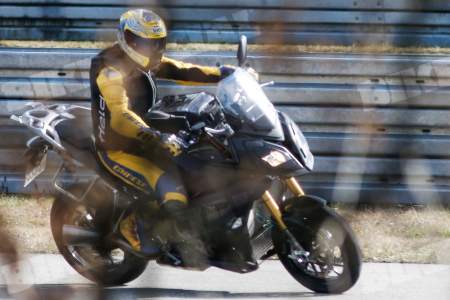 What do you get if you take a BMW S1000R and add a splash of R1200GS DNA?  This; the new BMW S1000 Adventure which was spied at the firm’s proving ground in Germany this week.

Just because BMW Motorrad dominate the adventure bike market doesn’t mean they’re resting on their laurels.  With so many similar bikes only ever climbing up pavements instead of the mountains they were designed to conquer, it’s no surprise that the likes of Ducati and Aprilia released their electronically advanced Multistrada and Caponord respectively. The German marque appear to be filling a hole in their range although some might say they are creating a whole new category – the Super-Adventure Bike. 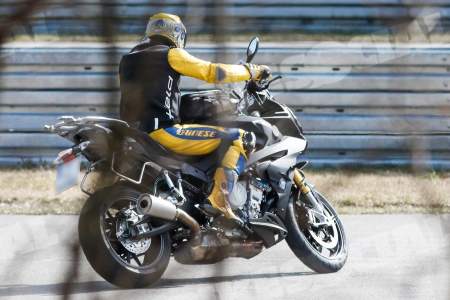 However, from the spy shots it’s well-worth pointing out that the exhaust’s low ground clearance, some sport-looking suspension, lack of radiator protection and some tyre-hugging mudguards, you could begin to think that the BMW could well be doing battle with Kawasaki’s Z1000SX and Yamaha’s FZ1 Fazer instead of it’s more adventure-based rivals.

Either way, the images do show clearly that this almost production-ready model has the same chassis as the S1000R with a possible stronger sub-frame to cope with the weight of the apparent luggage-carrying capabilities of the GS range; top box, panniers etc. 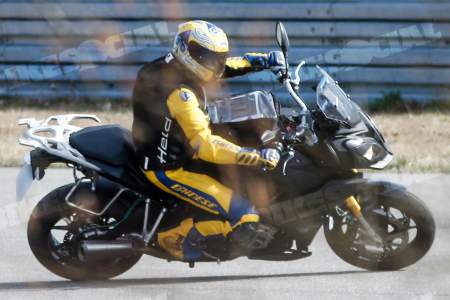 We can fully expect the same 999cc, 16-valve motor used in the S1000R, slightly modified from its four-year older brother, the S1000RR, with a reshaped cylinder head, softer cams, revised injection system and new four-into-one pipe. All of which provides 160bhp in the S1000R although when you consider how much heavier the new model would be, the power would be similar to the Z1000SX and FZ1000, around the 140bhp mark.

The similarities don’t end there with 17” wheels and radial brakes clearly on display from the images.

As per the Ducati and Aprilia, as well as the R1200GS, the new machine is very likely to be jam packed with advanced technology likely to include up to four engine modes, Automatic Stability Control, Dynamic Traction Control, ABS brakes and Dynamic Damping Control semi-active suspension, as used by the HP4.