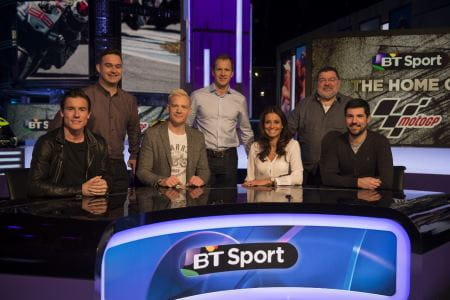 BT Sport has officially announced that Mel Sykes will be fronting its MotoGP coverage this year!

The TV babe who shot to fame following that infamous Boddington's advert, will head-up BT Sport's star-studded line-up of presenters.

The official announcement will be made on stage at the MCN London Motorcycle Show at ExCEL today, but BT Sport officially revealed the news at a star-studded party last night. Alongside Mel Sykes, the rest of the exciting MotoGP line-up is as predicted by Bike Social last week.

Simon Green, head of BT Sport, said: “It’s really exciting to be launching such a thrilling new sport on BT Sport, with a tremendous new team and what we believe will be a fresh approach to MotoGP and some fantastic new shows.

“MotoGP is the top, two-wheeled motorsport. It’s massive in the UK and we're heading into it at full throttle and following every second of the action. We’re sure we’ll appeal to committed fans, but we also think we will win over and welcome new fans to the sport.”

The BT Sport team is made up of a mix of regular TV pundits, mixed with bike racing experts and former World Champions.

Insiders say that Mel Sykes has been swotting up on her MotoGP knowledge and has already had the production team in fits of laughter, and has formed a great relationship with commentator Julian Ryder already.

Former WSB Champions Neil Hodgson and James Toseland will be the experts on track when the show kicks-off at the first round in Qatar.

As predicted by Bike Social last week, Hodgson has signed for the full year, but Toseland is on a rolling commitment depending on how his schedule looks for his new band 'Toseland'.

BT Sport will also include a new Tuesday night 8pm TV show called MotoGP Tonight as part of its pledge to racing fans to improve bike racing coverage on TV.

The weekend MotoGP coverage will feature almost six hours of live coverage from Saturday and Sunday, covering all classes including MotoGP, Moto2 and Moto3.

As part of the show's new features, BT Sport has also announced that users of the BT Sport app will be able to watch the main race, and choose between seven other camera views including four fitted to bikes.

Full races and highlights including interviews and features will also be available to watch on the app.

BT Sport has a five year exclusive deal to televise MotoGP in the UK.