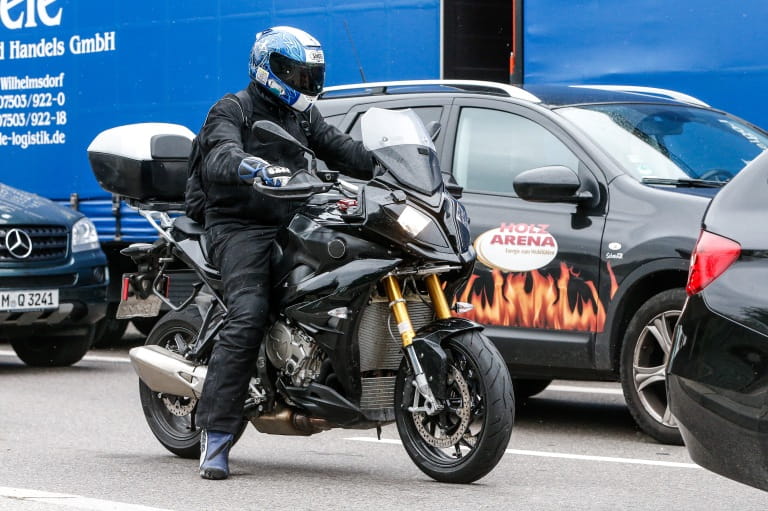 Back in March we bought you spy shots of a BMW S1000-based adventure bike which we now know will be called the S1000XR and the latest set of spy shots, taken this week by our spy snapper close to BMW Motorrad’s German factory show the bike in near production ready condition.

With an expected launch in October at the Intermot trade show, BMW’s new 2015 all-rounder will challenge the likes of the Ducati Multistrada, Triumph Tiger 1050, KTM 1190 Adventure and Kawasaki Versys 1000 in the sports-touring sector.

BMW are already major players in the adventure bike world with their all-conquering R1200GS but as you can see from the spy photographs, the S1000XR targets a more on-road sports adventure market particularly with its tyre-hugging mudguards, no radiator protection, little ground clearance, sporty-looking suspension and an underbelly 4-into-1 exhaust system with a new silencer.

From the spy shots the asymmetrical headlights from the S1000R and RR, the looks of which still divides opinion, have clear evidence of tape across them so only time will tell if they will remain asymmetrical on this new model or whether the firm have gone with a more symmetrical look. Other new parts include an adjustable screen and hand guards.

The bike appears to be using the same chassis as the S1000R but with taller handle bars and seat allowing for a more upright seating position. We can see the top-box apparent in the photographs and with pannier-carriers too, the rear sub-frame is likely to be stronger to cope with the additional weight. 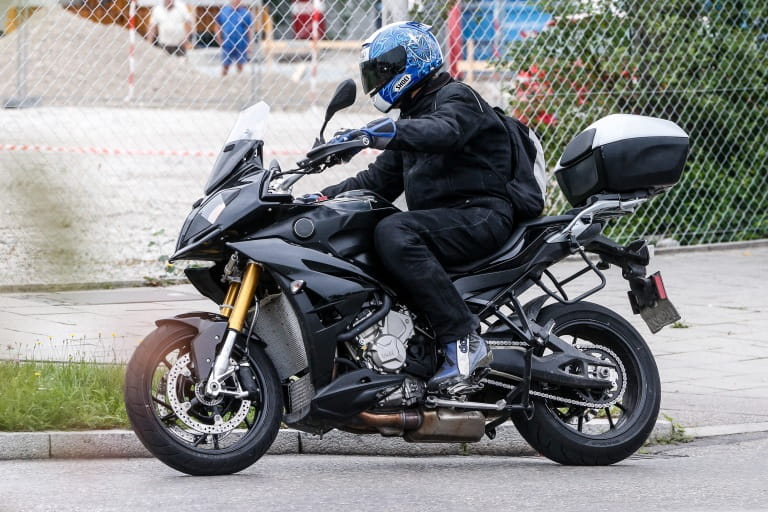 Speaking of weight, we understand the bike will weigh 215kg, only 8kg more than the S1000R and the original RR on which it is based, while providing an almost identical 160bhp from the 999cc 16-valve engine. The bike is expected to come fully equipped with BMW’s latest technology including engine mode settings, Dynamic Traction Control, ABS, semi-active suspension and Automatic Stability Control.

Surely the courier’s choice of motorcycle.