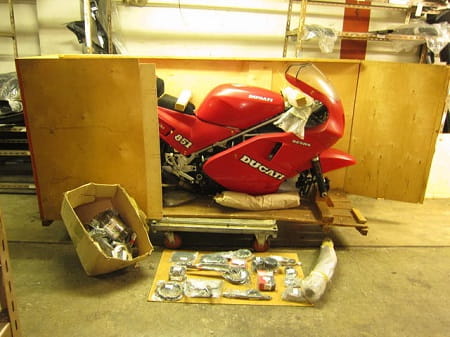 An incredibly rare Ducati 851 Lucchinelli Replica that’s been in its crate for 25 years is just one of hundreds of bikes for sale at this weekend’s Stafford Classic Motorcycle Show.

The limited-edition race replica actually was actually fitted with an 888 motor as standard from the factory and the bike has been sat in its crate since the bike was built at the Bologna factory in 1989!

Bonhams estimate it will fetch in the region of £14,000 to £18,000 at this weekend’s auction at Stafford. Though before you get bidding and start reaching for your wallet, you have to take fees into consideration too.

Ducati built the Lucchinelli Replica in 1989 to celebrate Lucchinelli’s opening round win at Donington Park in 1988. Like the works racer, the Replica gained its extra 37cc capacity by a 2mm overbore which, coupled to an increased compression ratio, revised Weber fuel injection and a new exhaust, helped raise crankshaft horsepower to a claimed 132bhp. That was some number in its day.

The road bike's standard tubular-steel trellis frame was retained as it was good enough for the works racers, but the wheel size was increased to 17" diameter and bigger Brembo brake discs were specified. It’s believed only 20 to 30 bikes were ever built.

This particular bike was imported into the UK in January 1990 by Moto Vecchia Cagiva Ducati GB Limited, the official importer at that time.

The machine was delivered to the first owner's garage where it remained for approximately 3-4 years before being purchased by the current owner where it has remained unpacked in its original crate!

Bonhams say the bike has not been worked on or tampered with and is just as it was when it left the factory more than 20 years ago, complete with a spares/accessories package and ancillaries still in the box.

It will be on sale at the Bonhams auction at Stafford on Sunday, viewing is available on Saturday too.

If that’s not enough the Stafford Show is packed full of thousands of classic bikes, hundreds of trade stands and a huge autojumble. 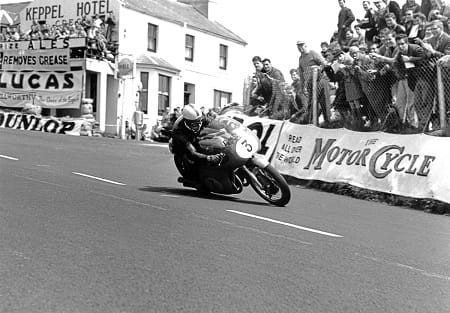 Special guest John Surtees - the only man to ever win world championships in both top flight two and four –wheel championships  - will be on stage on both days talking about his favourite moments from his extensive career.

It is 50 years since the 80-year-old captured his Formula One crown and Surtees will be launching a new photographic memoir in June.

Spokesman for the show, James Robinson, editor of The Classic MotorCycle magazine, said: “It’s superb to see so many incredible machines and big names from the world of classic motorcycling coming together for our Stafford event.

“It shows a real renaissance in the world of classics and these stunning machines are a real attraction for long term visitors and newcomers alike.”

Tickets cost £13 on the gate. It opens on Saturday and Sunday from 9am to 6pm and parking is free. For more details see Classic Bike Shows.