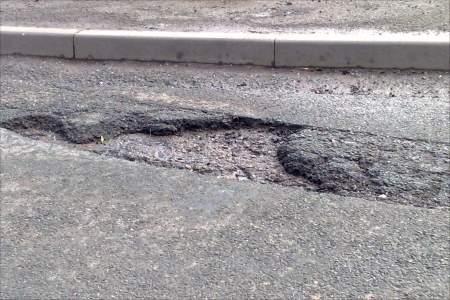 Go for a ride and you often find yourself concentrating harder on avoiding pot holes than dozy car drivers, such is the state of Britain’s roads at the moment.

So it’s no surprise that almost two-thirds of Britain’s motorists think the UK’s pothole problem is out-of-control and the Government are doing a bad job of maintaining the UK’s roads.

According to the latest research published today by road safety charity the Institute of Advanced Motorists (IAM), almost 69 per cent of male motorists are unhappy with the state of Britain’s roads. There are estimated to be a staggering 3.2million pot holes in the UK.

IAM chief executive Simon Best said: "Despite the government's pothole review, there is a high level of dissatisfaction with the efforts of authorities to keep our roads safe and smooth to drive or ride on.
"The government need to convince motorists that they have a real cure for the pothole pandemic. This can only be achieved through clear communication on new policies, more sharing of resources and sustained long-term funding.”

The survey showed that a third of motorists (34 per cent) think their council is cutting spending on road maintenance but, 60 per cent of drivers don't know if budgets are being cut, suggesting councils are performing poorly on informing and engaging with local residents.

As reported by Bike Social last month, an extra £200m to fix the problem over 2014/2015 was announced in Chancellor George Osbourne’s budget. This is on top of the £140m which was made available earlier in March to repair the road networks affected.