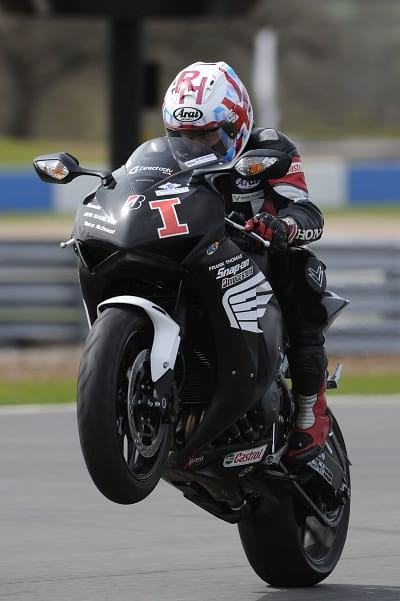 The Honda Ron Haslam Race School is back at Donington Park for good, and to celebrate, Ron kicked off his 2013 season with a host of brand-new 2013 CBR600RRs and a bunch of celebrities from the world of music, bike racing, acting and television in attendance. 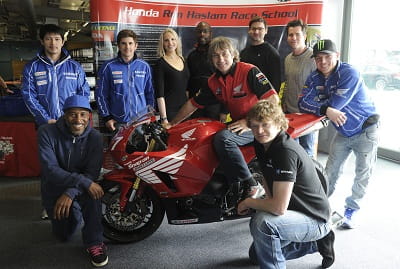 Lining up to get out on the Honda Ron Haslam Race School’s Premier course on brand new CBR600RR’s and rubbing shoulders with customers and Ron Haslam, were:

Skunk Anansie drummer Mark Richardson is no stranger to Ron’s school, and as well as a keen enduro rider, he also owns a Yamaha Super Tenere, and has been to Haslam’s school dozens of times. He said: “It’s absolutely brilliant, I do one and then I just keep coming back for more.” 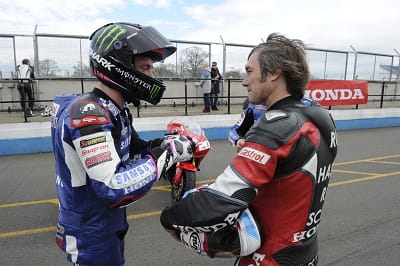 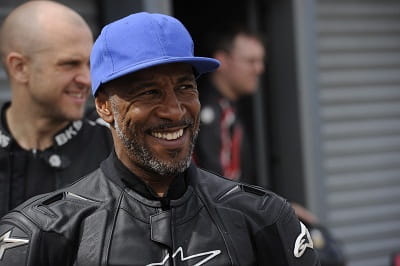 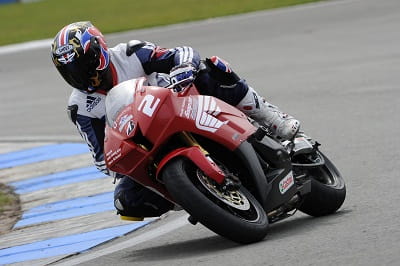 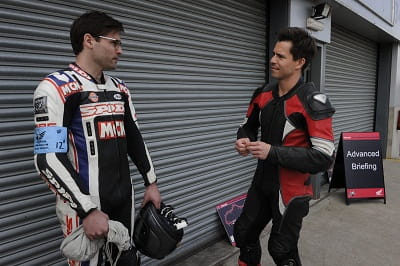 We took part in the Premier course, a £289 day out with three track sessions, full briefing, bike and kit supplied, and instruction from some of the oldest hands in bike racing.

I paired up with old hand and mate Trevor Franklin, ex-MCN road tester and ex-Performance Bikes tester with Mick Waring as our instructor. He’s a man who has done literally thousands of laps of Donington Park, but wary of our road testing abilities, he took out a Fireblade to give him some safety margin that we weren’t just going to clear off. As we told him, we were at Donington Park to learn and blow off the winter rust. Ron of course is always on hand but tends to look after the Premier Course which uses Fireblades and datas-loggers for serious committed track riders. 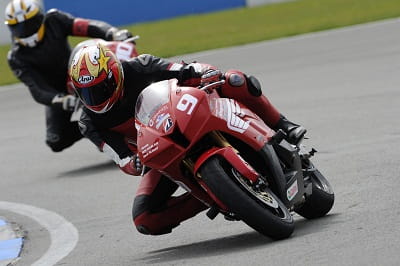 The first Premier session set a nice pace where we got our eye in, following his every move. The second upped the pace a bit and we started getting on to proper speed. Or so we thought, right until the point Alex Lowes, Samsung BSB rider dropped in past us fully sideways for at least 100 feet, on the way into the Melbourne Loop. Just to check we’d seen his heroics, he looked back as I gave him a nod of recognition.

By the third session we’d had a chat about lines on some of the corners we were looking to go faster through and Trevor was told off for running up the inside of Mick on the way out of Goddards, but it was all in good spirits. The pace was as fast as we wanted, with a  great system where other instructors put their hands up and pull to the side of the track when a faster group is coming through, making overtakes safe and meaning you can ride at the pace you want to. 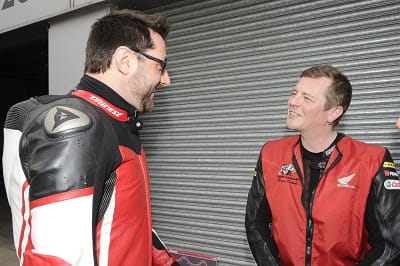 Somehow, Trevor and I both managed to score 100 per cent, which was absolutely nothing to do with the bung we gave our instructor in the break…

We’d recommend pairing up with a rider or mate of a similar ability so you get the most out of the day and to make sure you ride at the pace you want to go.

The instructors are brilliant, there’s the Premier course for more experienced riders, and riders as young as 12 can attend the Ron Haslam Race School and get their first taste of on-track experience.

As an amaing day out where you get to puhs yourself, get some great instruction, and get to thrash someone else's bike, we can't reccomend it enough. Check out the dates and options for the Honda Ron Haslam Race School here.

Big thanks to Ron Haslam and the amazing Ann Haslam who keeps the whole show together.