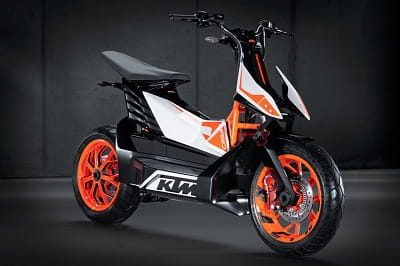 KTM has revealed a new urban electric sports scooter called the ESPEED!
The bike builds on the electric bikes that KTM already has on sale, uses the same battery and electric technology as the Freeride E, but brings the concept in from the field to the town.

KTM’s CEO, Stefan Pierer explains:“We at KTM are completely convinced
of electric mobility as a perfect complement to conventional powertrains. In the long term, the electric drive will come out on top for short distances – particularly in areas which are highly sensitive from an environmental perspective, like open nature and densely populated metropolitan areas!"

He added: "Vehicles like the ‘ESPEED’ and FREERIDE E can help powered two-wheelers win back more acceptance in society. Not just because of their environmental credits, but because they are easy to use, quick,
and simply great fun.”

As KTM says, it’s ‘True to designer Kiska’s motto that each and every component of a KTM must have both an aesthetic and a structural function, the chassis and bodywork of the “E-SPEED” have turned out uncluttered and iconic with a true premium look.’