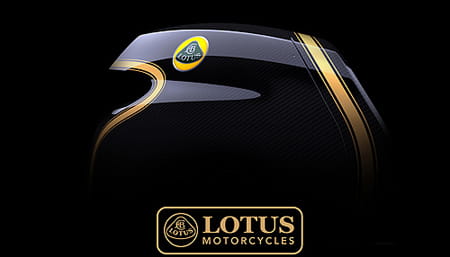 It has been announced that the Lotus name is set to make its debut appearance in the two-wheeled world in the next few months. The iconic car manufacturer's new bike is to be named the C-01and will be designed by Daniel Simon, a car designer who formerly worked for Bugatti and is well-known as a concept designer in the film industry.

Lotus Motorcycles is a joint venture of Kodewa racing team, who currently run the Lotus LMP2 in the FIA World Endurance championship; Daniel Simon and the Holzer Group, who happen to own Kalex. It would seem while the machine is set to be given the Lotus name, Lotus itself will have little contribution to its production.

The C-01 is set to be a 'hyper bike' with integrated racing technology. It will be manufactured of materials like carbon, titanium and aerospace quality steel, which are also used in Formula 1. It is said the C-01 will be powered by a 200bhp engine.

No suggested dates are mentioned however images of the C-01 are expected to be revealed over the coming weeks.