Circuit of Wales gets go ahead from Council 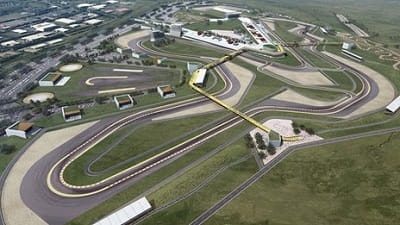 Earlier in the year, Bike Social reported that Wales could host MotoGP in 2015, a project backed by DORNA boss Carmelo Ezpeleta… Today this came one step closer to becoming a reality as the Circuit of Wales – a £250m project based in Blaenau Gwent – application for outline planning permission was approved by Blaenau Gwent council.

The 830-acre site is expected to attract 750,000 visitors each year, creating 3,000 new jobs during the construction phase and around 6,000 new jobs once the project is complete, something which the Welsh Government is readily backing.  The site will include a leading motor sports race academy and training facility to develop young riders and drivers - the stars of tomorrow as well as a technology park to cater for high spec R&D, providing opportunities for growth of related businesses.

The circuit’s designers are the same team who are responsible for designing London’s Olympic Park and The Silverstone Wing and the organisers expect it to offer a unique experience for fans. Expect under cover seating and undercover bike parking, so whatever the weather you never have to get wet.

Silverstone’s MotoGP deal expires at the end of 2014 and with a British GP up for grabs we could very well be heading to the Welsh moors to see Crutchlow, Redding & co. in action in 2015.