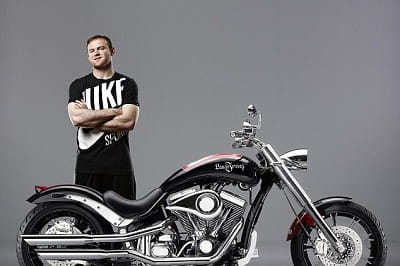 A 2012 Lauge Jenson chopper designed by Manchester United’s Wayne Rooney is going up for auction at Bonhams next month. It’s expected to fetch between £40,000 and £60,000 for Danish children’s charity KidsAid when it goes under the hammer on February 20.

The bike is built by little-known Danish custom bike builder Lauge Jensen and features a replica of Rooney’s autographed 'No 10' football shirt mounted and lacquer-sealed onto the petrol tank, diamond encrusted shift rod gear lever. There’s also artwork on the rear mudguard that depicts Rooney’s celebration when he scored a goal to help Man United take the 2011 Premiership title.

Commenting on his design, Rooney said: "I was really excited to have the opportunity to be involved in the design of a unique 'Wayne Rooney' Lauge Jensen custom bike.

"The bike we have designed takes its inspiration from the celebration of my overhead kick against Manchester City last season. The goal has been described by others as being of the highest quality and technical excellence, powerful and beautiful.

"I hope you will agree that the bike is all of this and more.

"The fact that the funds raised will go to kids in Denmark is a great way for me, on behalf of all the players at Manchester United, to say 'thank you' for the support we receive from the Danish people."