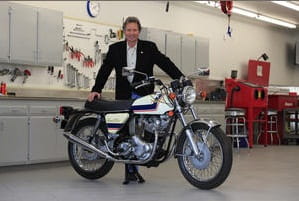 Think of Eddie Lawson and most people think of the GP champ mastering a Marlboro Yamaha YZR500 or sideways on a Kawasaki Z1000 superbike, not plodding around on a Norton Commando!

Fortunately the former 4-times GP World Champion is selling this bike unridden, so we can leave those mental images of Lawson in our head a bit longer. He may have been known as ‘Steady Eddie’ because he always kept his cool and stayed on the bike, not because he was a fan of chugging round on Classic bikes! It was also for sale last year but didn’t hit the reserve.

The 1975 Norton Commando was still in its original crate when acquired by Lawson in 1990. It was de-crated several months ago but Lawson decided it wasn’t the right bike to make his ‘comeback’ on!

The bike is believed to have never run and has just 0.7 miles on the clock. It’s estimated to sell for between £16,000 and £22,000 in Thursday’s auction at Bally’s Las Vegas Hotel and Casino.