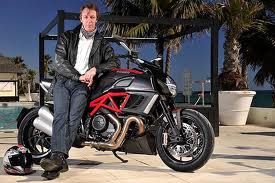 The world of motorcycle journalism lost one of its true heroes this week with the news that Kevin Ash, 53, was involved in a fatal accident while on the press launch of BMW’s R1200GS.

Hundreds of tributes to Kevin have been posted on forums and social media sites since the news broke yesterday.

Ashy, as he was known to the motorcycle industry, was best known for his column in the Telegraph, and his contributions to MCN, but he also worked for almost every motorcycle magazine in the world, and more recently was a contributor to Bike Social.

BMW’s official statement said: “It is with deep regret that BMW Motorrad confirms the fatal injury of Kevin Ash in a motorcycle accident during a launch event in South Africa. The accident happened to the north of a town called George, 250 kilometres east of Cape Town. Out of respect for Kevin's family and friends, no further information is being made available at this time.”

Adrian Roderick, general manager for BMW Motorrad UK, said: “We are shocked and deeply saddened to hear the awful news about Kevin Ash; one of the most well-liked, experienced and respected journalists in the extremely close-knit motorcycle community. Losing Kevin is a tragedy which will be felt across the entire industry. He was a friend, as much as a journalist, and will be sorely missed. Our heartfelt thoughts are with his family, friends and colleagues at this awful time.”

Kevin was one of the founder members of Fast Bikes magazine in 1991 before going on to join MCN in 1994. After running the road test department at MCN and rising to the ranks of Assistant Editor, he became a freelance journalist in 1997, working for pretty much every magazine around the world.

His reputation as a motorcycle journalist was first class and he was never scared to mince his words if a bike didn’t live up to the hype. Triumph even banned him from press launches once when he wrote about them unfavourably.

He was known for his antics in the bar as much as in the field of bike testing and would always sit himself next to the most important man in the room when it came to industry dinners, making sure he was the first man to get to the bottom of the latest story in biking.

During his long career as a motorcycle journalist Kevin rode thousands of motorcycles and was undoubtedly the best at his profession, always looking for the next story. He was a great writer, an accomplished road and track rider and former racer. But beyond his motorcycle journalism his main love was his wife Caroline and his three daughters.

From all at Bennetts and Bike Social we send our deepest condolences to his family and friends. He was a great man and a great friend to many in the motorcycle industry and will be sorely missed.