Honda brings back the Monkey Bike, sort of! 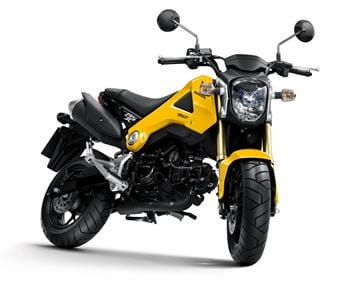 Honda’s Monkey bike may no longer be on sale but Honda has brought back the spirit of the Monkey at least with this new for 2013 Honda MSX125.

And we have to say that on looks alone we’re won over by the Honda!

It’s a cross between a motorcycle and a scooter, with the attitude of  a bike with the ease of a twist n’go scooter. It uses a Honda Wave 125 2-valve engine and an all new chassis and styling designed for first riders to ride something both easy to use, with plenty of cool style and that’s also truly practical.

Honda itself says it’s aiming the bike at a generation known as Generation Y in the USA, or Street-Kei in Japan. Basically ‘a teenager who has been brought up in a borderless internet age who share a culture and a fashion that defies convention’. We just think it looks cool.

MSX125 stands for Mini Street X-treme 125 and the bike is manufactured in Thailand.

It uses an engine from the Honda Wave 125 (930,000 sold worldwide), with a  new steel chassis, upside down front fork, 12-inch wheels with block pattered fatty tyres (that’s what some Japanese mates of mine call them), disc brakes and a monoshock at the back.

It’s available in red, white or yellow. The bike will be on sale in the UK later this year, no prices are yet available. And we can’t wait to get our hands on one for test! 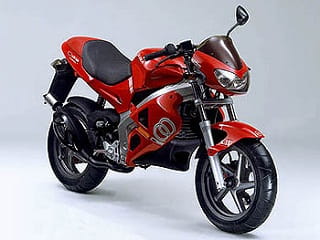 We couldn't help thinking that as cool as the Honda MSX125 is, that in concept at least it looks remarkably similar to the Gilera DNA that was launched in the early noughties. What do you reckon?