Boorman back on a GS in new TV show 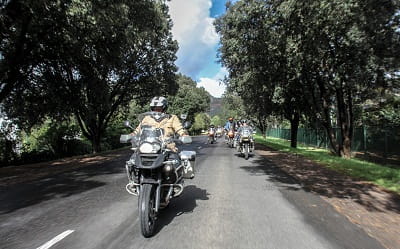 The London-based star once again used a BMW R1200GS Adventure to take him all over South Africa while filming the show.

Boorman, who is no stranger to motorcycling adventures, travelled over 6200 miles on the GS to complete a full circuit of South Africa, taking in the southern coast of Africa as well as the borders of Mozambique, Botswana and Namibia. However, this was more than just a motorcycle tour; along the epic ride Boorman faced some of his most fearsome and difficult challenges to date.

Boorman learns how the natives live off the land in the vast and utterly inhospitable Kalahari desert, one of the harshest environments on the planet. And from blistering heat to freezing cold, Boorman also took on the Sani Pass, where he had to battle through almost impassable, frozen roads to reach the icy peak.

Boorman said: "I've had the most amazing time travelling through South Africa over the six weeks I spent there. I fell in love with the continent the very first time I came here during my second riding adventure, ‘The Long Way Down’. On some of my big rides, we're travelling so far that you just don't have the time to stop and enjoy the country. So I decided to concentrate on South Africa, and explore a little more of what's on offer here."

He added: “The big GS is the perfect motorcycle to discover this wonderful, vast country on, and I feel so lucky to have been able to really explore it once again on two wheels. There's also no better way to end a trip than with the massive convoy of bikes we rode into Cape Town with!"