Your name could be on Silverstone’s Wall of Fame

If you’ve ever dreamed of seeing your name appear alongside the likes of Giacomo Agostini, John Surtees and Scott Redding then it may sound like wishful thinking or even the result of many hours in front of the Playstation. However, Silverstone are currently constructing a Wall of Fame which offers race fans that very chance.

The 'Wall of Fame' will be constructed during 2014 and will be located at the retired Bridge corner on the previous incarnation of the Grand Prix circuit along the banking as the artist’s impression shows.  Stones containing the names of famous Silverstone winners will appear along the centre of the Wall and will be surrounded by race fans' own personalised ‘Celebration Stones’ which can be purchased by anyone via the website. They’re available in three sizes from £59 - £499 although Bike Social readers are welcome to use the code BEN10 for a 10% discount.  Ideal if you’ve not yet got your Christmas presents sorted! 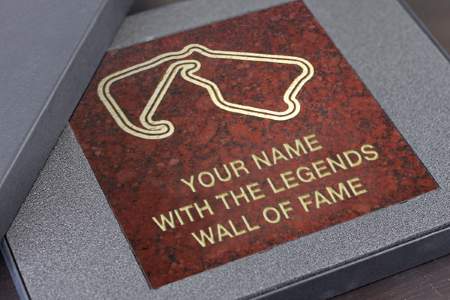 Silverstone have reached an agreement with Motor Sport Magazine to include the names of the Hall of Fame’s 20 international motorsport legends into the Wall of Fame. These are the many famous riders and drivers who have won at the circuit who will have their names inscribed into their own stone with the appropriate layout of the circuit as it was during their racing period.

Scott Redding, Britain’s latest MotoGP star was presented with his stone at the recent Motorcycle Live at the NEC in recognition of his stunning 2013 Moto2 race victory. 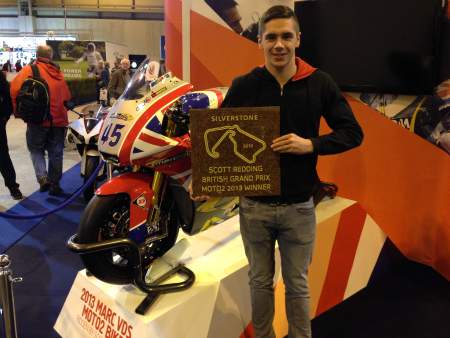 The aim of the exercise is to create a lasting international tribute to all forms of motorsport bringing fans, volunteers, riders and drivers all closer to the circuit making it ‘feel more like the home of motor racing’. Bridge Corner was the obvious location because it is still in situ, remains part of the history of the circuit and fans can still access it easily which Silverstone believe can become a fitting focal point to the area which, at the larger events, is adjacent to many of the large trade stands.

Richard Phillips, Silverstone’s Managing Director, said “We are excited by the Silverstone Wall of Fame and I was pleased to present a stone to Scott Redding for his achievements in Moto2 at the British Grand Prix this year. This will go well alongside the stones we are already seeing booked which range from fans commemorating their favourite hero to club championship winners and marshals. We’ve also had people get involved from as far afield as the Middle East and Russia.”