Biker to get off road training courtesy of Bennetts Biking Dreams 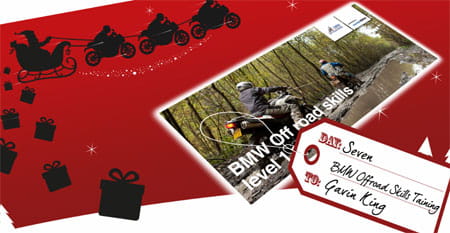 The seventh Bennetts Biking Dream winner was surprised today with news his dream to go on an off-road skills course will soon be coming true.

Gavin King, a computer technical analyst from Hull is a long time motorcycle fan, who currently rides a Fireblade. His love for motorcycling has rubbed off on his son, Ryan, who is now an avid motocross fan. Rivalry has struck up between the pair, with King often being shown up by Ryan on the track.

King submitted his dream to improve his off-road skills to the Bennetts Biking Dreams website who are going to fulfil it as part of the 12 Dreams of Christmas campaign. King will visit Si Pavey’s off-road school in Wales sometime in the New Year. . Pavey is widely known for his involvement in the Dakar Rally and has accompanied Bennetts ambassador Charley Boorman - star of the Long Way Down and Extreme Frontiers TV series - on expeditions such as the ‘Race to Dakar’.

“I am really excited to have the opportunity to learn off-road skills, and from such an experienced instructor” said King on receiving his prize.

“I can’t wait to get going and I’m hoping the course will help to improve my ability to ride on loose ground as well as on the road. Ultimately, I want to show my son that his old man has still got it!”

“Things like this don’t happen to me. It has been at least six months since I placed my wish with Bennetts Biking Dreams and I did not expect to win. I’m overjoyed!”