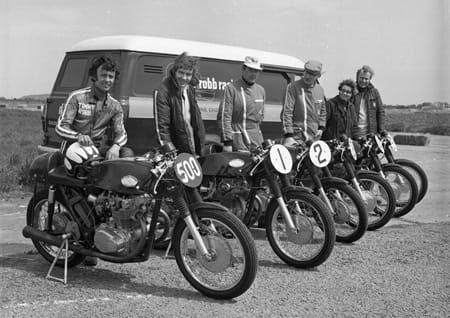 Former motorcycle journalist and motorcycle industry stalwart David Dixon passed peacefully under the chequered flag for the final time on 20 July in a Surrey nursing home. Dixon was one of those unique people whose working life covered virtually every facet of the motorcycle industry, excelling at most things he turned his hand to including a wide range of motorcycle sports, although the race track was favourite haunt.

Dublin-born David Dixon (above photo, third from right) with his trademark white helmet with a shamrock on the front spent his early years competing in motorcycle sport in Ireland before moving to London. He started his 13-year career as staff writer in 1958 on the leading motorcycle publication affectionally known as the ‘Blue Un’ otherwise properly known as ‘The Motorcycle’ and he can often still be seen in the many reprinted articles that now appear.

He spent his time testing new machines and covering national and world championship race meetings, as well as still finding time to compete. Not only a talented writer, his ability to ride and get the best out a machine and report honestly, made him a firm favourite with readers and the industry.

He is credited with being one of the first journalists in the UK, if not Europe, to test ride Honda motorcycles and was one of the few journalists ever allowed to ride some of the exotic works racing machines including Agostini’s MV thanks to his on-track abilities.

In part this led to friendships with the many works riders and celebrities he came into contact with. Eventually these associations and the demise of the magazine led to he and Honda works rider, fellow countryman Tommy Robb, founding a racing school in 1971 that expanded to become the biggest in Europe, as well as being hugely popular in the UK with many riders taking up racing after a session or two. 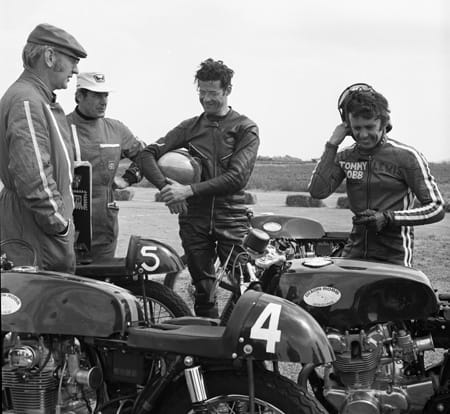 He was still writing freelance in the down time, but eventually from the school came Dixon Racing Ltd which tuned Japanese four-strokes and produced high performance machines for the road. His first attempt at sponsorship netted a TT win in the 1973 500 Production TT, such was the quality of his machines.

He then went on to become a general motorcycle dealer as well, selling Hondas and Suzukis. Later his stable included Yoshimura high performance parts and briefly he even became the UK importer for Bimota motorcycles. It was David through Dixon Racing who ran the hugely successful Racing and Sporting Show each year in central London in the early eighties.

Moving on from this he put his knowledge of all aspects of the industry to good use by joining Murray Evans Associates, a PR agency working for the UK Motor Cycle Industry Association (MCIA) and he quickly became its spokesman. During this time he also formed the All Party Parliamentary Motorcycle Group and the Theft Action Group which are all still going strong and representing motorcyclist interests at all levels.

Even in retirement he was still active writing the biography of his friend and former colleague, the late technical illustrator Lawrie Watts, as well as still riding with the industry motorcycle club.

Apart from motorcycling David Dixon enjoyed classical music, opera and reading. He leaves behind a wife, Christine, son Stephen, daughter Claire, and his grandchildren, Finn and Rory. RIP David, you will be missed!