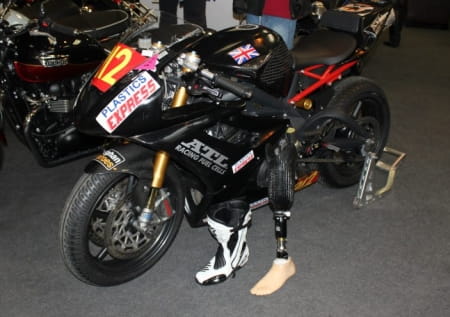 True Heroes Racing team are polishing down their machines and prepping themselves for the first round of the Triumph Triple Challenge this weekend at Brands Hatch.

The team was formed in association with the military charity ‘Afghan Heroes’ and aims to help injured UK Service personnel ‘regain a sense of direction by competing in motorsport.’

After being severely injured and losing both his legs in an IED explosion in 2010 whilst on active service in Afghanistan, Lance Corporal Murray Hambro of the Second Royal Tank Regiment will be riding for the team this year, and riding in the competitive Triumph Triple Challenge series on a specially adapted Daytona 675R.

Keep an eye out for Hambro on track, he will riding with the number ‘912’, a number etched in his memory as it recalls the day of the explosion, 9 December.

We’ve got no doubt that Hambro will use his determined, fighting spirit to do his best in the series this year and we wish him all the luck.