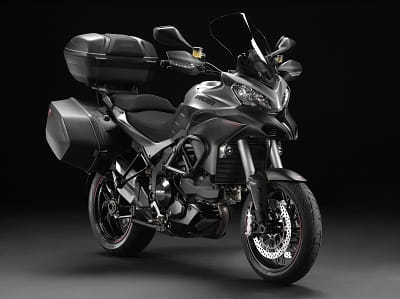 The new model gets extra wide panniers, a top box and extra LED lights for improved night riding (if you’ve ever ridden a Multistrada at night you’ll know it needs them), a bigger screen and more-road biased tyres suitable for long distance riding.

As well as the new Granturismo, the ‘S’ models can now be fitted with semi-active suspension system called Ducati Skyhook Suspension (DSS).

It’s the first time this suspension has been fitted to a production Ducati motorcycle and allows the bike to adjust the damping rates depending on road surface, load and speed of the bike. The aim is to give the best possible riding performance on any surface.

Details are sketchy at the moment, but we’ll tell you more when we get in front of Ducati bosses at the Intermot shiw in Germany next month.

Semi-active suspension has been tested for years by Ducati, but this is the first time it has been fitted to a production Ducati off-the-shelf. Troy Bayliss is known to have tested it on his WSB bike a few years ago, and Yamaha have been experimenting with it for years through its relationship with suspension firm Ohlins. In fact, Ohlins will sell you a semi-active suspension upgrade if you’re prepared to pay almost £2000 for a rear shock! 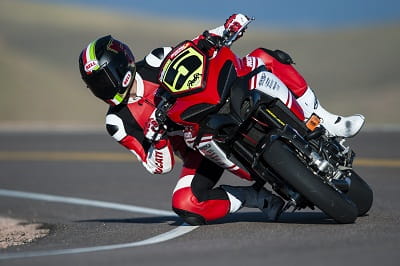 No prices have yet been set but all versions will be on sale in the UK from December. For more see www.ducati.co.uk