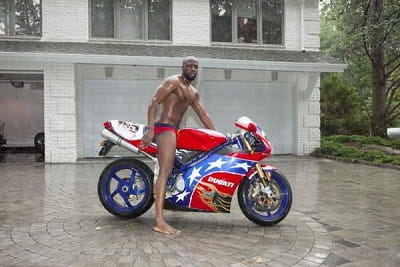 He’s sold lorry loads of records, toured all over the world and won countless awards, but when American rap star Wyclef Jean wanted to celebrate his birthday, he did it sat on his Ducati 998S Bostrom Replica wearing only matching red and blue pants!

The former member of the Fugees, who looked like he’d buffed up especially for the occasion, tweeted yesterday to his 2.8 million followers: ‘TODAY I AM 43 YEARS OLD! I look And feel 26! U cant keep a good Man down! Keep a smile when they want you to frown!’

He’s obviously a big fan of Ducati too. His Twitter homepage background shows him riding his Bostrom replica Duke wearing only a tracksuit and a hat. Check it out on Twitter, just follow @wyclef at www.twitter.com

The Ducati Bostrom replica was a limited-edition special from the Ducati factory featuring a unique red and purple paint scheme and a numbered plaque on the top yoke. Just 155 were built, to coincide with Bostrom's race number.

The special edition was built to celebrate American Ben Bostrom's success in WSBK for Ducati in 2000 and 2001. In 2001 Bostrom won an incredible six WSB races on the trot, including a double win at Brands Hatch.

Bostrom famously had Alpinestars make him a set of Evel Knievel replica leathers which he used during the 2001 season. The thirty-eight year-old rider now races in AMA Superbikes for a Suzuki team backed by American Basketball Legend Michael Jordan.