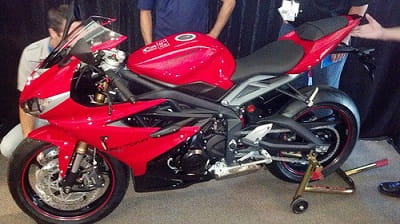 These are the first fully-finished pictures of Triumph’s new 2013-model 675 Daytona.

The pictures, believed to have been taken from a dealer unveiling, show the updated Daytona 675 which will be revealed on November 13 at the Milan Motorcycle Show.

The pictures were posted by a forum user on www.675.cc, a popular forum for 675 owners that has been running since 2007.

The bike appears to have been given the same treatment as the new Street Triple which was unveiled last month, so that’s new bodywork, headlights, swingarm, underbelly exhaust and race-style seat unit. 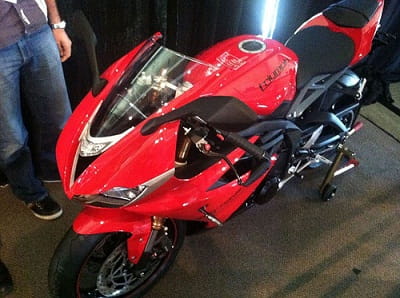 No technical details about the new model are yet known, but people we know that have ridden the bike say it's a cracker, and the bike is believed to be out in Spain at the moment undergoing final pictures for Triumph's 2013 brochure.

Triumph is keen to build upon the success of the 675 Daytona following the firm’s success in the British Supersport championship which was won last weekend by Aussie Glen Richards on a Smiths of Bristol Triumph 675R.