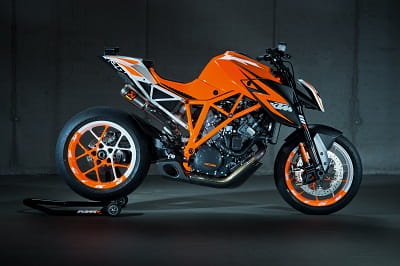 KTM have let their engineers lose on the maddest naked bike ever – the 180bhp KTM 1290 Super Duke R.

The prototype bike made its entrance in a boom of revs and noise at the Milan Show, but what’s perhaps even more surprising is that KTM say they ARE going to put it into production in 2013.

KTM tasked its engineers, test riders and designers to come up with a bike that did away with all known boundaries of complying with regulations and legal provisions, through the best WP suspension prototype test kit they could find at it, increased the capacity of the RC8R motor and came up with this!

One of the bike’s test riders told us that the 180bhp V-twin is as insane to ride as it is to look at and wheelies in fifth gear! Looking at the rear tyre on the bike, all worn, it's already been through an extensive test programme including former GP riders testing the bike.

The prototype features a single-sided swingarm, race spec wheels, the best Brembo brakes money can buy for the street, slick tyres and rolled out the best carbon-fibre for the bodywork. 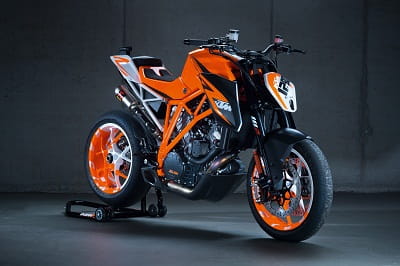 Lurking under the bike is a full race-spec ABS system which allows wheelies and stoppies if so required and you’ve got the Super Duke R.

The final production version will be tamed and have to meet laws around the length of the seat unit, and reach compromises like fitting road-legal tyres, lights and indicators, but KTM bosses are keen the whole project remains true to the prototype seen at Milan when it goes on sale in 2013.

BMW are also expected to be launching a naked version of the BMW S1000RR in 2013, so its looks like the growing naked bike sector looks to be getting even more insane next year.