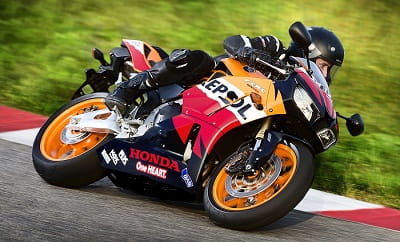 The new CBR600RR takes styling hints from the current Honda RC213V MotoGP bike with aerodynamic lessons taken from the 2010 Honda RC212V to give what Honda claims will be class-leading agility and aerodynamics which give 6.5 per cent less drag then the outgoing model.

The new bike, unveiled at the EICMA Show in Milan this evening also gets new rear suspension, revised air intakes and lightweight new wheels which all added up give the best-selling bike a total makeover for 2013.

Honda’s Series Large Development Project Leader Hirofumi Fukunaga said: “The new CBR600RR builds on the platform of the previous model, taking performance to a new level. It delivers an awesome ride on the circuit, but is even easier to ride on city streets. It sounds contradictory, but the natural fusion of the two aspects of the bike’s character is what makes this model even more attractive than its predecessor.” 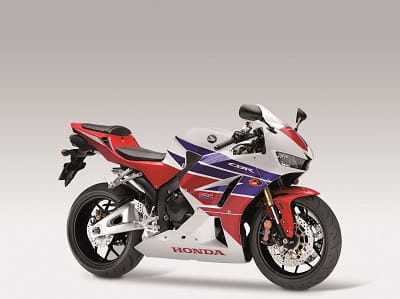 Honda claim that the progress of tyre development and the improvement in braking performance has increased the dive from the front forks under heavy braking, hence the problem should be solved with the introduction of Big Piston Forks. They should improve feel on the road and track, decrease the amount of dive under braking. They are fully adjustable for rebound, compression and preload. There’s also an electronic steering damper which increases resistance as the bike gets faster.

At the rear the bike uses a new swingarm and new prolink suspension linkage to improve damping and traction under heavy acceleration.

New superlight weight wheels which copy the design of the current Honda CBR1000RR Fireblade are used front and rear to increase the bike’s agility and cut-down on unsprung weight. The whole bike fitted with ABS weighs in at 193.4kg when fully-fuelled.

Twin 310mm discs remain up front with four-piston calipers and a radial brake master cylinder, and a 220mm disc at the rear. The whole system is linked to Honda’s proven electronic combined ABS system front and rear.

Engine wise, the bike uses a development of the current CBR600RR engine and makes a claimed 119.65bhp (88Kw), though Honda are keen to point out that increasing power and torque were never their target for this bike. Almost 120bhp should be plenty from a 600 in our opinion too.

A new Direct Air Induction System  (DAIS), ram-air to you and me, is fitted which features an air intake directly between the bike’s headlights and straight through the headstock of the bike’s frame. Intake noise has been reduced by 3 decibels without losing the familiar howl well known to riders of CBR600s.  A newly improved ECU system keeps everything in check and is claimed to offer improved throttle response and smoothness on the gas.

There’s an 18-litre fuel tank and Honda claims 56.5mpg when tested under laboratory conditions on a rolling road.

A whole host of accessories will be available for the bike when it goes on sale next year. You can see it for the first time at Motorcycle Live at the NEC late on in November.