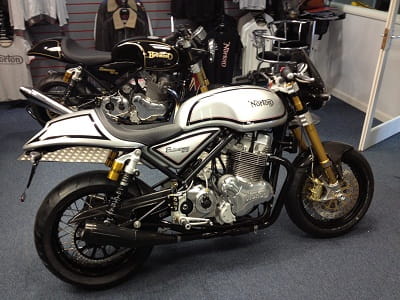 The new Commando 961 SF is a modified version of the standard Commando Sport but with a host of accessories and extras to turn it into the ‘Sport Factory’. 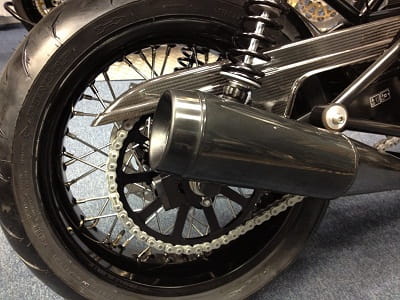 The SF uses the same basic chassis and engine as the other Commandos in the Norton range but is the highest spec Commando Sport yet built by the factory.

We managed to snap the pictures at Norton’s factory on Friday afternoon before Norton boss Stuart Garner loaded the bikes up for their debut at Motorcycle Live tomorrow morning (Saturday).

Look carefully in the back of the main image at the top of this page and there's another logo on the tank of the black bike.

The Commando in the background is in fact a special one-off built for Bremont, a Norton watch partner. Look carefully and you can see Bremont on the tank in place of the Norton logo. That bike is going down to Bremont's Mayfair store for display next week.

Talking about the SF, Norton’s CEO, Stuart Garner said: “We wanted to show what’s possible with the Commando Sport, and the new Commando shows the potential of the Sport with a bit of alternative thinking to turn into a Sport Factory.”

Garner also showed Bike Social a new two-seater pre-production bike that is also being displayed at Motorcycle Live, and a bigger touring tank that can be retro-fitted to any of the Commando 961s.

A new twin seat unit with carbon number plate bracket will be displayed at Motorcycle Live and made available as an aftermarket accessory. 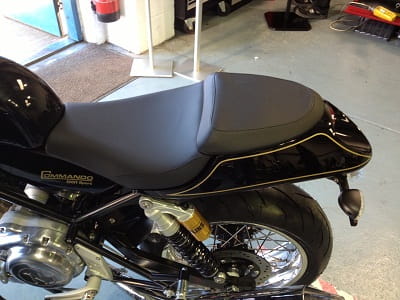 Norton are also planning a Cafe Racer with a hand beaten aluminium tank and matching bodywork that Garner hopes to call the Cafe Racer SF.

Garner was keen to point out that Norton is set for further expansion with a new building being built and new milling machines already in place so that even more parts can be made in house.

Also, Garner says the firm has cleared the backlog of bikes waiting to be built and is now making its own frames in-house at their Donington Park base.